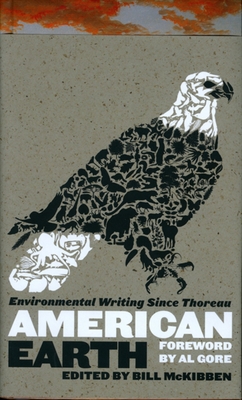 
Special Order—Subject to Availability
As America and the world grapple with the consequences of global environmental change, writer and activist Bill McKibben offers this unprecedented, provocative, and timely anthology, gathering the best and most significant American environmental writing from the last two centuries.

Classics of the environmental imagination, the essays of Henry David Thoreau, John Muir, and John Burroughs; Aldo Leopold's A Sand County Almanac; Rachel Carson's Silent Spring - are set against the inspiring story of an emerging activist movement, as revealed by newly uncovered reports of pioneering campaigns for conservation, passages from landmark legal opinions and legislation, and searing protest speeches. Here are some of America's greatest and most impassioned writers, taking a turn toward nature and recognizing the fragility of our situation on earth and the urgency of the search for a sustainable way of life. Thought-provoking essays on overpopulation, consumerism, energy policy, and the nature of nature, join ecologists - memoirs and intimate sketches of the habitats of endangered species. The anthology includes a detailed chronology of the environmental movement and American environmental history, as well as an 80-page color portfolio of illustrations.
Bill McKibben, editor, is the author of many books, including The End of Nature (1989), the first account of global warming for a general audience, and most recently Deep Economy: The Wealth of Communities and the Durable Future (2007). Since 2006, he has organized the largest demonstrations against the causes of global warming in American history. He is scholar in residence at Middlebury College.
"In his introduction to this superb anthology, McKibben (The End of Nature) proposes that 'environmental writing is America's most distinctive contribution to the world's literature.' The collected pieces amply prove the point. Arranged chronologically, McKibben’s selection of more than 100 writers includes some of the great early conservationists, such as Henry David Thoreau, John Muir and John Burroughs, and many other eloquent nature writers, including Donald Culross Peattie, Edwin Way Teale and Henry Beston. The early exponents of national parks and wilderness areas have their say, as do writers who have borne witness to environmental degradation—John Steinbeck and Caroline Henderson on the dust bowl, for example, and Berton Roueché and others who have reported on the effects of toxic pollution. Visionaries like Buckminster Fuller and Amory Lovins are represented, as are a wealth of contemporary activist/writers, among them Barry Lopez, Terry Tempest Williams, Barbara Kingsolver, Michael Pollan, Paul Hawken, and Calvin deWitt, cofounder of the Evangelical Environmental Network. McKibben's trenchant introductions to the pieces sum up each writer's thoughts and form a running commentary on the progress of the conservation movement. The book, being published on Earth Day, can be read as a survey of the literature of American environmentalism, but above all, it should be enjoyed for the sheer beauty of the writing." —Publishers Weekly (Starred review)