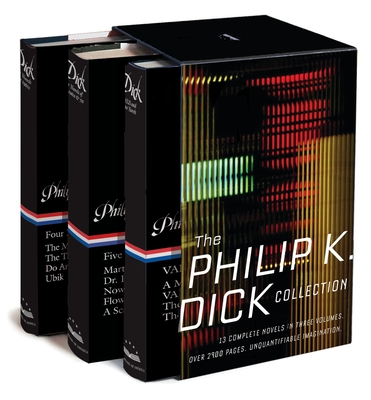 The Man in the High Castle • The Three Stigmata of Palmer Eldritch • Do Androids Dream of Electric Sheep? • Ubik • Martian Time-Slip • Dr. Bloodmoney • Now Wait for Last Year • Flow My Tears, the Policeman Said • A Scanner Darkly • A Maze of Death • VALIS • The Divine Invasion • The Transmigration of Timothy Archer

LIBRARY OF AMERICA is an independent nonprofit cultural organization founded in 1979 to preserve our nation’s literary heritage by publishing, and keeping permanently in print, America’s best and most significant writing. The Library of America series includes more than 300 volumes to date, authoritative editions that average 1,000 pages in length, feature cloth covers, sewn bindings, and ribbon markers, and are printed on premium acid-free paper that will last for centuries.
Philip K. Dick (1928-1982) was the author of 36 novels and more than 120 stories, including such celebrated works as The Man in the High Castle and Do Androids Dream of Electric Sheep? (the basis for the film Blade Runner). He was inducted into the Science Fiction Hall of Fame in 2005.