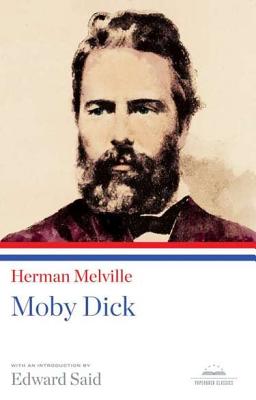 "A work tantalizingly subversive, and yet somehow if not affirming at least forgiving of the blind destructiveness of human nature and of nature itself."
-Elizabeth Hardwick

Moby-Dick is one of the great epics of all literature. Captain Ahab's hunt for the white whale drives the narrative at a relentless pace, while Ishmael's mediations on whales and whaling, on the sublime indifference of nature, and on the grimy details of the extraction of oil provide a reflective counterpoint to the headlong idolatrous quest. Sometimes read as a terrifying study of monomania or a critical inquiry into the sinister effects of reducing life to symbols, Moby-Dick also offers colorful and often comic glimpses of sea-faring life.
For almost thirty years, The Library of America has presented America's best and most significant writing in acclaimed hardcover editions. Now, a new series, Library of America Paperback Classics, offers attractive and affordable books that bring The Library of America's authoritative texts within easy reach of every reader. Each book features an introductory essay by one of a leading writer, as well as a detailed chronology of the author's life and career, an essay on the choice and history of the text, and notes.
The contents of this Paperback Classic are drawn from Herman Melville: Redburn, White-Jacket, Moby-Dick, volume number 9 in the Library of America series. It is joined in the series by two companion volumes, and together they present Melville's complete fiction.

Herman Melville (1819-1891) sailed as an ordinary seaman in the Pacific as a young man, turning these experiences into a series of romances that launched his literary career. By 1850 he was married, had acquired a farm near Pittsfield, Massachussetts, and was hard at work on his masterpiece Moby-Dick. Literary success soon faded, his complexity increasingly alienating readers. After a visit to the Holy Land in January 1857, he turned from writing prose fiction to poetry. In 1863, during the Civil War, he moved back to New York City, where from 1866-1885 he was a deputy inspector in the Custom House, and where, in 1891, he died.

Edward W. Said (1935–2003) was University Professor of English and Comparative Literature at Columbia University. He was the author of more than twenty books, including Orientalism, which was nominated for the National Book Critics Circle Award; Culture and Imperialism; and Out of Place: A Memoir