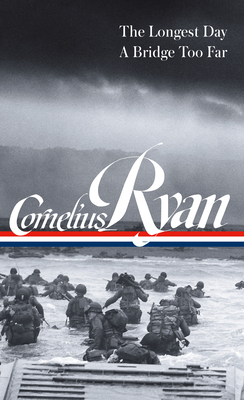 
In Stock—Click for Locations
For the 75th anniversary of D-Day, a deluxe collector's edition gathering two gripping masterpieces of military history.

Library of America presents two of the best books ever written about World War II in a deluxe collector's edition featuring 88 pages of photographs, full-color endpaper maps, rare archival material revealing how the books were written, and a new introduction by Pulitzer Prize-winning journalist and historian Rick Atkinson (The Liberation Trilogy). The Longest Day tells the story of the Allies' greatest success, the Normandy invasions of June 6, 1944, Operation Overlord; A Bridge Too Far recounts perhaps their greatest failure, the catastrophic airborne invasion of Holland in September 1944, known as Operation Market Garden. Together, they reveal not only the twisting fortunes of war and the grand sweep and scale of the largest amphibious and airborne invasions ever mounted, but also the very real human experience of combat, the small but momentous individual acts that can change the course of history. No one has told these stories more powerfully than Cornelius Ryan.

LIBRARY OF AMERICA is an independent nonprofit cultural organization founded in 1979 to preserve our nation’s literary heritage by publishing, and keeping permanently in print, America’s best and most significant writing. The Library of America series includes more than 300 volumes to date, authoritative editions that average 1,000 pages in length, feature cloth covers, sewn bindings, and ribbon markers, and are printed on premium acid-free paper that will last for centuries.
Born in Dublin, Cornelius Ryan (1920-1974) covered the war in northwest Europe as a correspondent for the London Daily Telegraph, 1944-45, before moving to the United States in 1947, working as a writer for Collier's Weekly. After the demise of Collier's Ryan began writing a book about D-Day. The Longest Day (1959) was followed by The Last Battle (1966), about the fall of Berlin, and A Bridge Too Far (1974), published shortly before his death from cancer.

Editor Rick Atkinson (b. 1952) is a Pulitzer Prize-winning journalist and historian. He is the author of The Long Gray Line (1989); In the Company of Soldiers (2004), based on his embedded reporting from Iraq in 2003; and the acclaimed Liberation Trilogy: An Army at Dawn: The War in North Africa, 1942-1943 (2002); The Day of Battle: The War in Sicily and Italy, 1943-1944 (2007); and The Guns at Last Light: The War in Western Europe, 1944-1945 (2013)
"Military history at its best. . . . Cornelius Ryan captured it all with his seamless first-person accounts, which flesh out the minute-by-minute military narrative. Every paragraph leaps with action. . . . Not only does it hold up after 60 years, it should be required reading in every high school and college in America for the next 50 years." —Winston Groom, The Wall Street Journal

“There are plenty of authoritative histories of the D-Day landings, but few can match Cornelius Ryan's storytelling prowess in The Longest Day.” —Jade Colbert, The Globe and Mail

“A gifted reporter and writer, Cornelius Ryan set the standard for telling war stories that fly by like the best novels. Any reader seeking both the broad strokes of military strategy and the gritty, surprising, inspiring, and often terrible details of combat can do no better than these two books.” —Mark Bowden, author of Black Hawk Down