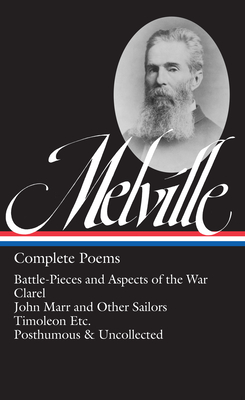 This is book number 4 in the Library of America Herman Melville Edition series.

An unprecedented single-volume edition of one of America's greatest poets, released to celebrate his bicentennial

Herman Melville ranks with Walt Whitman and Emily Dickinson as one of the three great American poets of the nineteenth century. Whether meditating on the bloody battlefields of the Civil War, the mysteries of faith and doubt in the Holy Land, or the strange relationship between the Maldive Shark and the pilot fish that glide before “his Gorgonian head,” Melville’s verse combines precise physical detail and rich metaphysical speculation in an unorthodox style and with a compressed power uniquely his own. The fruit of decades of textual scholarship, this fourth and final volume of the Library of America Melville edition gathers for the first time in one volume all of Melville’s poems: the four books of poetry published in his lifetime, his uncollected poems, and the poems from two projected volumes of poetry and prose left unfinished at his death.

Battle-Pieces and Aspects of the War is both a deeply philosophical work of mourning for the Civil War dead and a fascinating record of campaigns and battles and the war’s immediate aftermath. With a cast of characters to rival Moby-Dick, the epic poem Clarel, about a young American divinity student’s pilgrimage to the Holy Land, plumbs the profound existential and religious questions that haunted Melville throughout his life. In two late privately issued books, the retrospective John Marr and Other Sailors and Timoleon Etc., the aging poet returns to the nautical scenes and reading of his youth. Many of the poems in the two manuscripts left unfinished at Melville’s death, Weeds and Wildings and Parthenope, have not been previously available in a reliable trade edition.
Herman Melville (1819-1891) sailed as an ordinary seaman in the Pacific as a young man, turning these experiences into a series of romances that launched his literary career. By 1850 he was married, had acquired a farm near Pittsfield, Massachussetts, and was hard at work on his masterpiece Moby-Dick. Literary success soon faded and in 1863, during the Civil War, he moved back to New York City, where from 1866-1885 he was a deputy inspector in the Custom House. A draft of a final prose work, Billy Budd, Sailor, was left unfinished and unknown until its rediscovery and publication in 1924.

Hershel Parker is the H. Fletcher Brown Professor Emeritus at the University of Delaware, the General Editor for the final two volumes of the Northwestern-Newberry Edition of The Writings of Herman Melville, and the author of several books, including Melville: The Making of the Poet and Herman Melville: A Biography, a finalist in 1997 for the Pulitzer Prize.
"Melville wrote oceans of prose; the poetry didn’t lag far behind. Library of America [has issued] a comprehensive 1,000-page collection of that poetry, and if all you know of this marine master is Moby-Dick, it’s high time to dip your toes in the lyrical swash." —Colin Fleming, The Washington Post

"One hundred years after his birth, Melville would be rediscovered on the basis of his prose. Two hundred years on, he’s due for a complete reckoning. . . . Complete Poems, edited by Hershel Parker and published on the occasion of Melville’s bicentennial, should convince any reader that Melville’s poetry was the coherent, sustained output of a conscious craftsman." —The Times Literary Supplement