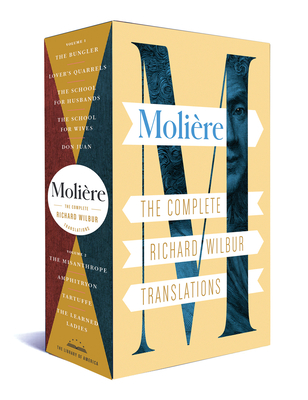 
Special Order—Subject to Availability
For the 400th anniversary of Moliere's birth, all of Richard Wilbur's unsurpassed translations of Molière's plays--themselves towering achievements in English verse--are brought together for the first time in this two-volume gift set.

One of the most accomplished American poets of his generation, Richard Wilbur (1921-2017) was also a prolific translator of French and Russian literature. His verse translations of Molière's plays are especially admired by readers and are still performed today around the world. "Wilbur," the critic John Simon wrote, "makes Molière into as great an English verse playwright as he was a French one." Now, for the first time, all ten of Wilbur's unsurpassed translations of Molière's plays are brought together in two-volume boxed set, fulfilling the poet's vision for the translations.

The first volume comprises Molière's delightful early farces The Bungler, Lovers' Quarrels, and The Imaginary Cuckhold, or Sganarelle; the comedies The School for Husbands and The School for Wives, about the efforts of middle-aged men to control their young wives or fiancés, which so delighted female theater goers in Moliere's seventeenth-century France; and Don Juan, Molière's retelling of the timeless story, performed only briefly in the playwright's lifetime before pious censure forced it to close and not part of the repertoire of the Comédie-Française until 1847.

The second volume includes the elusive masterpiece, The Misanthrope, often said to occupy the same space in comedy as Shakespeare's Hamlet does in tragedy; the fantastic farce Amphitryon, about how Jupiter and Mercury commandeer the identities of two mortals ; Tartuffe, Molière's biting satire of religious hypocrisy; and The Learned Ladies, like Tarfuffe, a drama of a household turned suddenly upside down. These volumes include the original introductions by Richard Wilbur and a foreword by Adam Gopnik on the exquisite art of Wilbur's translations.
Molière, born Jean-Bapiste Popquelin in 1622, is one of the greatest writers of French and European literature. His comedies are still performed today around the world. One of the most accomplished American poets of his generation, Richard Wilbur (1921-2017) was also a prolific translator of French and Russian literature, including the plays of Molière and Racine, and the poetry of Valéry, Villon, Baudelaire, and Akhmatova. He was U.S. Poet Laureate in 1987-88 and was the recipient of numerous prizes and awards, including two Pulitzer Prizes for Poetry, the National Book Award for Poetry, the Wallace Stevens Award, the Frost Medal, and the Bollingen Prize. Adam Gopnik has been a staff writer at The New Yorker since 1986. In 2013 he was awarded the medal of Chevalier of the Order of Arts and Letters by the French Minister of Culture.