The Writer's Guide to Weapons: A Practical Reference for Using Firearms and Knives in Fiction (Paperback) 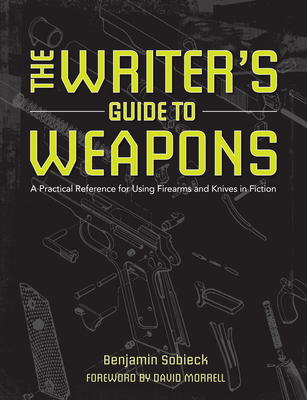 The Writer's Guide to Weapons: A Practical Reference for Using Firearms and Knives in Fiction (Paperback)


Not On Our Shelves—Ships in 1-5 Days
When it comes to writing weapons, most authors shoot from the hip--and miss. The Writer's Guide to Weapons will help you hit your target every time.

Firearms and knives have starring roles in a wide range of genres--crime, thriller, war, mystery, Western, and more. Unfortunately, many depictions of weapons in novels and film are pure fiction. Knowing the difference between a shotshell and a slug, a pistol and a revolver, or a switchblade and a butterfly knife is essential for imbuing your story with authenticity--and gaining popularity with discerning readers.

• An in-depth look at the basics of firearms and knives: how they work, why they work, what they look like, and how to depict them accurately in your stories.
• The biggest weapons myths in fiction, TV, and film.
• A surefire guide for choosing the correct weapon for your characters, no matter their skill level, strength, or background.
• A review of major gun and knife laws, weapons safety tips,and common police tactics.
• "The Hit List," showcasing the most popular weapons for spies, detectives, gunslingers, gangsters, military characters, and more.
• Examples highlighting inaccurate vs. accurate weapons depictions.
• An insightful foreword by David Morrell, the award-winning creator of Rambo.
Equal parts accessible, humorous, and practical, The Writer's Guide to Weapons is the one resource you need to incorporate firearms and knives into your fiction like a seasoned professional.
Benjamin Sobieck is an online editor and product manager for a number of weapons and outdoors magazines, such as Gun Digest, BLADE, Living Ready, and Modern Shooter. A crime and thriller author, he has appeared in such anthologies and journals as Burning Bridges: A Renegade Fiction Anthology, Exiles: An Outsider Anthology, Black Heart Magazine presents Noir, and Out of the Gutter. He has also worked as a newspaper crime reporter. For more about Sobieck and his crime-fighting creation, detective Maynard Soloman, visit www.CrimeFictionBook.com.
"Benjamin Sobieck's The Writer's Guide to Weapons is a "must-have" for fiction and fantasy writers, from novelists to screenwriters, comic writers, video game storyboarders, and more. The Writer's Guide to Weapons debunks common weapon myths in popular media and walks readers through authentic details about the possession and usage of an immense variety of weapons; the result is an extremely fascinating, accurate, and practical resource." --Midwest Book Review