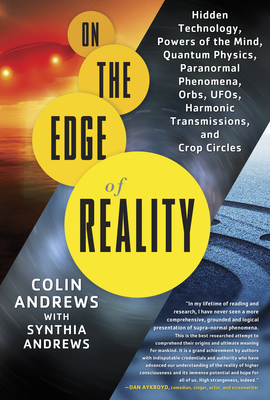 A global expansion of consciousness is underway. As predicted by ancient prophecy, old ways of thinking and of seeing the world are shifting. Mind-stretching new phenomena are challenging current reality. New frontiers of science are disclosing a connection between our consciousness and physical reality.

As consciousness changes, so do our perceptions. The door is opening to a new reality.

Join Colin and Synthia as they explore what is beyond this door. Examine the multitude of current changes--from the bases of society to the foundations of science--that indicate the unfolding of a new paradigm. Investigate non-ordinary reality and unexplained phenomena as interactions of consciousness.

In this fascinating new title, you will explore and learn about:
Colin Andrews is a visionary and 30-year veteran investigator of unusual phenomena. He is best known for his work with crop circles, a term he coined in 1983. Colin is responsible for discovering the correlation between patterns of RADAR interference and weather conditions in Australia, where weather modification projects are underway. He is currently involved in investigating consciousness and non-ordinary reality. He is the author of eight books, including The Complete Idiot's Guide to 2012 (with Synthia Andrews), and has participated in numerous television programs and documentaries. His work can be viewed at www.colinandrews.net.
Synthia Andrews, ND, is a licensed naturopathic doctor who graduated in 2008 from the University of Bridgeport. Previously, she worked for 30 years as a massage therapist. Through her personal healing journey, Andrews came to recognize the importance of the mind and emotions in healing. Consequently, her work focuses on the underlying spiritual and emotional aspects of health. She currently sees patients in a private practice in Guilford, Connecticut.

Andrews has written or coauthored seven books on healing, subtle energy, and consciousness, including The Path of Energy and The Path of Emotions. She taught for 15 years at the Connecticut Center for Massage Therapy and 7 years at the Kripalu Yoga Institute. Andrews is an authorized teacher of Jin Shin Do Bodymind Acupressure, a Reiki Master-Teacher, and an instructor in energy awareness for personal and professional development.
"Colin Andrews' work has revolutionized my UFO-related research, moving me from nuts and bolts to exploring consciousness as the basis of a new paradigm. On the Edge of Reality deals with the connection between our consciousness and physical reality. I highly recommend that everyone read the book." --Grant Cameron, coauthor of UFOs, Area 51, and Government Informants
— Reviews

"On the Edge of Reality makes us as humans aware of a new reality that is going to guide our understanding of our place in the Universe and that we are all one, including the extraterrestrials who have been observing us for thousands of years. Quantum physics is slowly opening the door to mysteries of the Universe and our place in it; it shows that the Universe is more mysterious than we imagined and indeed more mysterious than we can imagine." --Dr. Jesse Marcel, Jr, MD, military officer, author of The Roswell Legacy
— Reviews

"In my lifetime of reading and research, I have never seen a more comprehensive, grounded and logical presentation of supra-normal phenomena. This is the best researched attempt to comprehend their origins and ultimate meaning for mankind. It is a grand achievement by authors with indisputable credentials and authority who have advanced our understanding of the reality of higher consciousness and its immense potential and hope for all of us. High strangeness, indeed." --Dan Aykroyd, comedian, singer, actor, and screenwriter
— Reviews