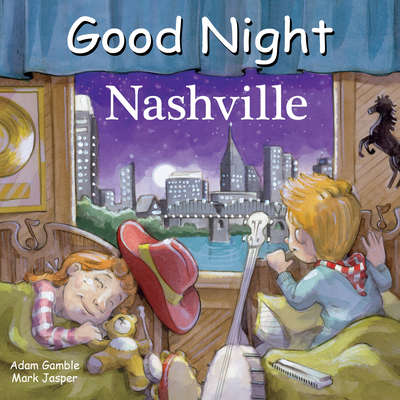 This book is part of the bestselling Good Night Our World series, which includes hundreds of titles exploring iconic locations and exciting, child-friendly themes.

Many of North America's most beloved regions are artfully celebrated in these board books designed to soothe children before bedtime while instilling an early appreciation for the continent's natural and cultural wonders. Each book stars a multicultural group of people visiting the featured area's attractions as rhythmic language guides children through the passage of both a single day and the four seasons while saluting the iconic aspects of each place.

Little one's will be treated to a personal tour of all their favorite sites and attractions. And don't forget the guitar!
Adam Gamble, is a writer, a photographer, and a publisher. He is the author of many books in the Good Night Books series, In the Footsteps of Thoreau, and A Public Betrayed. He lives in Sandwich, MA.

Mark Jasper is the author of many books in the Good Night Our World series, The Cape Cod Christmas Cookbook, Haunted Cape Cod & the Islands, and Haunted Inns of New England. He lives in Sandwich, MA.

David Leonard began his freelance illustration career in the first grade, trading colorings for pencils. He has never stopped drawing. In his efforts to always do better, David Leonard studied graphic design and illustration in school. His goal has never been to put an image on paper, but to capture a moment in time with gestures, emotions and paint strokes while reflecting his own fun, humorous and whimsical personality.

Telling stories through illustration on everything from books to billboards. David Leonard has worked with clients such as Amazon, Major League Baseball, Dr. Pepper, Random House, Warner Music, Highlights for Children and The New Yorker. When David is not illustrating, he enjoys feeding his snails and flying with his loving, forgiving, understanding, and supportive wife and their little, art-directing twin daughters.