Prose Poetry and the City (Paperback) 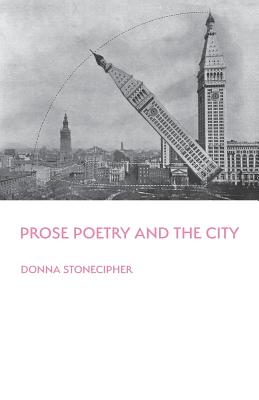 Prose Poetry and the City (Paperback)

"In this fascinating book, Donna Stonecipher doubles down on the development of prose poetry and the city. Tactically, her sweeping, complex yet meticulous essay engages Baudelaire's sudden--or is it sudden?--incursion from the constraints of verse into the 'roominess' of prose, 'paragraphs of place, ' while linking 'civic horizontality' and 'corporate verticality.' Tracking possibilities, (m)using everything from architecture to landscape to cookbooks, fl neur-like, her essay exuberantly and expertly gathers together rhizomatic threads of thinkers and poets of the last two centuries. Reads like a song." --Norma Cole

"This fascinating exploration of the prose poem begins with a question that most other studies have overlooked or taken for granted: 'What, if anything, do cities and prose poetry have to do with each other?' Donna Stonecipher's touchstone for this question is Charles Baudelaire's prose poems in Le Spleen de Paris, but her excavation of the relationship between the 'built environment' of prose poem and city moves backwards to ancient Greece and forwards to the new sentence. As Stonecipher unpacks the 'dialogic space' of the prose poem, her essay moves vertically and horizontally, providing histories of the skyscraper and the aesthetics and ethics of vertical ascension, and much else. As she moves nimbly through large swaths of intellectual, architectural, urban, and aesthetic history, Stonecipher engages debates central to poetics and to modernity itself, taking seriously the challenge of considering how aesthetic forms register, respond to, and transform their built, social, and historical environments. An indispensable and enlightening guide that is also a pleasure to read." --Susan Rosenbaum

Donna Stonecipher is the author of four books of poetry: The Reservoir (winner of the Contemporary Poetry Series competition, 2002); Souvenir de Constantinople (2007); The Cosmopolitan (winner of the National Poetry Series, 2008), and Model City (2015). Her poems have been published in many journals, including The Paris Review, New American Writing, and Conjunctions, and have been translated into six languages. She lives in Berlin.