So You Think You Can Be President?: 200 Questions to Determine If You Are Right (or Left) Enough to Be the Next Commander-in-Chief (Paperback) 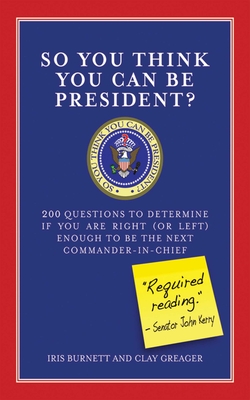 So You Think You Can Be President?: 200 Questions to Determine If You Are Right (or Left) Enough to Be the Next Commander-in-Chief (Paperback)


Special Order—Subject to Availability
"So You Think You Can Be President? is required reading not just for those of us who have had the audacity to ask ourselves that question, but for everyone."—Senator John Kerry What exactly does the leader of five legislative branches, ten executive branches, twenty departments, ninety-five independent agencies, and the free world do at his (or her) job every day? More importantly, what should the President of the United States (POTUS) know before she or he is elected? Have you ever thought, "I could do a better job than that bum in the White House"? Iris Burnett and Clay Greager have devised a hilarious test to see if you (yes, you) are qualified to be the next President of the United States. Tackling everything from your incredibly personal details (can you account for every penny you have ever made?) to your stance on hard-hitting issues like immigration, defense, and how many of your rich friends are going to get jobs they are totally unqualified for, So You Think You Can Be President? is a witty and uproarious send-up of our political process.
Iris Burnett has played key roles in five presidential campaigns and served as an advisor to President Clinton. She divides her time between New York, New York, and Arlington, Virginia. Clay Greager is a two-tour Vietnam War veteran and the author of several books. He lives in Key West, Florida.