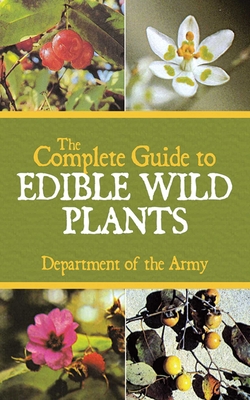 
Not On Our Shelves—Ships in 1-5 Days
Now outdoorsman and survivalists can own the official US Army guide to edible plants. Whether you are a stranded soldier, a wilderness hiker, or you just want to know which plants growing in your backyard are edible, this is an invaluable resource.

Anyone who has spent serious time outdoors knows that in survival situations, wild plants are often the only sustenance available. The proper identification of these plants can mean the difference between survival and death.

Hugely important to the book are its color photos. There are over one hundred of them, further simplifying the identification of poisonous and edible plants. No serious outdoors person should ever hit the trail without this book and the knowledge contained within it.
The U.S. Department of the Army is headquartered at the Pentagon in Arlington, Virginia, and authors The Soldier’s Guide, The Complete Guide to Edible Wild Plants, U.S. Army Hand-to-Hand Combat, U.S. Army First Aid Manual, U.S. Army Weapons Systems, U.S. Army Special Forces Handbook, U.S. Army Guide to Boobytraps, U.S. Army Explosives and Demolitions Handbook, U.S. Army Special Forces Guide to Unconventional Warfare, and Special Operations Forces Medical Handbook.