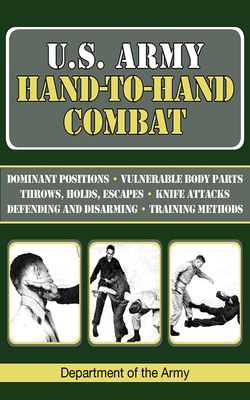 
Not On Our Shelves—Ships in 1-5 Days
The official illustrated guide from the US Army on the best ways to fight and win when you are reduced to going toe to toe with an enemy: fundamentals, vulnerable points., holds, and escapes, and more.

This manual was created to teach American solider hand-to-hand fighting techniques. It describes blows, holds, footwork, armwork, and other maneuvers that can be used to disable or kill an enemy. It explains how to us all available objects as weapons, and stresses aggressive tactics. You can subdue an opponent only through offensive measures.

What will you do if you are attached by an enemy with a knife? What are your vulnerable points? How will you disarm him? United States soldiers have been involved in those kinds of fights for centuries. This is what they’ve learned. This is how to fight. This is how to win.
The U.S. Department of the Army is headquartered at the Pentagon in Arlington, Virginia, and authors The Soldier’s Guide, The Complete Guide to Edible Wild Plants, U.S. Army Hand-to-Hand Combat, U.S. Army First Aid Manual, U.S. Army Weapons Systems, U.S. Army Special Forces Handbook, U.S. Army Guide to Boobytraps, U.S. Army Explosives and Demolitions Handbook, U.S. Army Special Forces Guide to Unconventional Warfare, and Special Operations Forces Medical Handbook.