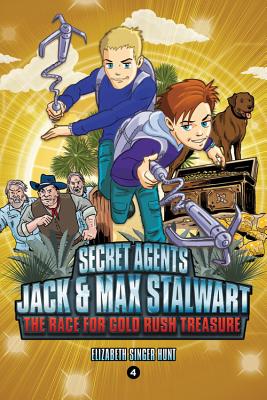 This is book number 4 in the The Secret Agents Jack and Max Stalwart Series series.

In the foothills of California's Sierra Nevada Mountains, an unbelievable discovery is made: $10 million in rare coins dating back to the California Gold Rush! Secret Agents Jack and Max Stalwart are sent to protect the treasure. But almost as soon as they arrive, it vanishes into thin air. Little do they know that the culprit is someone from Jack's past. Unfortunately for the brothers, the criminal isn't only after the loot. He wants revenge.
Elizabeth Singer Hunt is no stranger to the world of espionage. She's the granddaughter of a former spy and author of the award-winning Secret Agent Jack Stalwart chapter book series. The series has been named a "must read" for boys by the British Education Secretary, serialized by BBC Radio, and developed into an animated TV show. She's also the creator of the Secret Agents Jack and Max Stalwart chapter book series, The Secret Agent Training Manual, and The Secret Agent Jack Stalwart iPad app.

Praise for the new series:


"A handselling favorite as well as a go-to choice in schools for reluctant readers."
—Publishers Weekly

Praise for the original series: