Magazines and the American Experience: Highlights from the Collection of Steven Lomazow, M.D. (Hardcover) 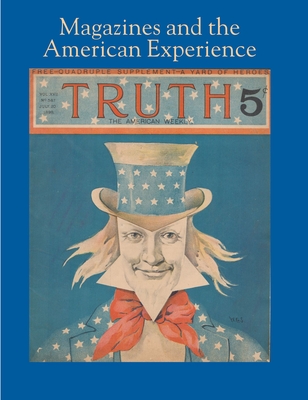 Magazines and the American Experience: Highlights from the Collection of Steven Lomazow, M.D. (Hardcover)


Not On Our Shelves—Ships in 1-5 Days
A gorgeously illustrated tour of several centuries of American magazine history.

The history of the American magazine is intricately entwined with the history of the nation itself. In the colonial eighteenth century, magazines were crucial outlets for revolutionary thought, with the first statement of American independence appearing in Thomas Paine’s Pennsylvania Magazine in June 1776. In the eighteenth century, magazines were some of the first staging grounds for still-contentious debates on Federalism and states’ rights. In the years that followed, the landscape of publications spread in every direction to explore aspects of American life from sports to politics, religion to entertainment, and beyond.

Magazines and the American Experience is an expansive and chronological tour of the American magazine from 1733 to the present. Illustrated with more than four hundred color images, the book examines an enormous selection of specialty magazines devoted to a range of interests running from labor to leisure to literature. The contributors—Leonard Banco and Suze Bienaimee, both experts in the field of periodical history—devote particular focus to magazines written for and by Black Americans throughout US history, including David Ruggles’s Mirror of History (1838), [Frederick] Douglass’ Monthly (1859), the combative Messenger (1917), the Negro Digest (1942), and Essence (1970). With its mix of detailed descriptions, historical context, and lush illustrations, this handsome guide to American magazines should entice casual readers and serious collectors alike.

Steven Lomazow, is adjunct professor of history at Kean University and was the primary periodical consultant for the Newseum in Washington, DC.
"A delightful combination of historical commentary and beautiful photos. . . The author covers a dizzying swath of territory with remarkable concision, including magazines devoted to literary pursuits, trade, social activism, business, and fashion. . . . Lomazow’s expertise on the subject is inarguably magisterial. . .The book is adorned with dozens of stunning photographs, some immediately recognizable as iconic and others tantalizingly esoteric and rare. This is a remarkable history—thoughtful, granularly meticulous, and comprehensive—as well as a visually spectacular showpiece. One needn’t be a magazine collector to thoroughly enjoy this refreshingly original overview of American history."
— Kirkus Reviews

“The print-besotted can console themselves with a Platonic vision of the Great American Newsstand as it never was, at least not all at the same time. . . .  Cumulatively, the titles on display give a window into broad themes of American history, including the emergence of political parties (which, back in the early 19th century, had their own magazines), the coming of the Civil War, the evolution of the Black freedom movement and the rise of new technologies like television and computers.”
— Jennifer Schuessler

“What made magazines appealing in 1720 is the same thing that made them appealing in 1920 and in 2020: a blend of iconoclasm and authority, novelty and continuity, marketability and creativity, social engagement and personal voice. … The American experiment is a print experiment at heart, and, for Lomazow, acquisition has meant watching history fall into place.”
—Nathan Heller, The New Yorker

“It intersperses a history with surveys of baseball, African-American culture, artists as illustrators, science, pulp fiction and humor.”
— Edward Rothstein

“That these magazines were all collected by one person makes [it] all the more remarkable. Included. . .are the first issues of. . . Time and Life and Playboy and Rolling Stone and Ms. The collection is equally committed to lesser-known domains, including the so-called little magazines that published the literary avant-garde in the early twentieth century, and periodicals dedicated to abolition, prohibition, and other political causes.”

“As is pointed out in the excellent catalogue, magazines built American communities, and fashioned their mores and prejudices.”

"Magazines and the American Experience: Highlights from the Collection of Steven Lomazow is a much-needed resource and offers a convincing argument for a greater appreciation of the medium."
— Bibliographical Society of America