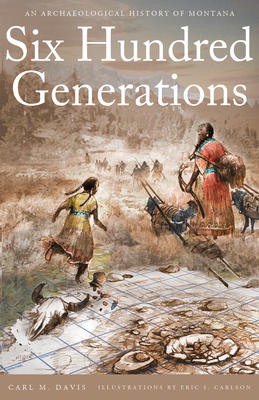 
Backordered
Six Hundred Generations is a stunning look at the archaeological evidence of Montana's long Indigenous human history. Focusing on 12 unique archaeological sites, the book takes readers on an extraordinary journey through time, technologies, and cultures. Beginning with the First Americans who followed mammoths into this landscape, peer-awarded Montana archaeologist Carl Davis describes how Native Americans lived, evolved and flourished here for thousands of years. The engaging writing is accompanied by a rich array of photographs of archaeological sites, artifacts, and rock art, along with conceptual illustrations of Montana's Indigenous peoples by noted artist-archaeologist Eric Carlson.
Raised in Dillon, Montana, Carl M. Davis received a bachelor's degree in anthropology from the University of Montana and a master's degree in anthropology from the University of Pittsburgh. He worked for 35 years as an archaeologist on national forests in Montana and Oregon, and in 2015 retired as the Regional Archaeologist for the U.S. Forest Service Northern Region in Missoula, Montana. For his dedication to preserving and promoting Montana history, Davis received the 2018 Montana Heritage Keeper Award, presented by the Montana Historical Society Board of Trustees. He resides in Missoula with his partner, Sara Scott.