I Used to Know That: Literature: Inside Stories of Famous Authors, Classic Characters, Unforgettable Phrases, and Unanticipated Endings (Hardcover) 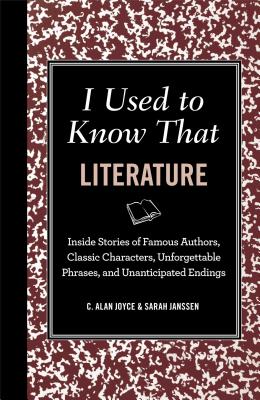 I Used to Know That: Literature: Inside Stories of Famous Authors, Classic Characters, Unforgettable Phrases, and Unanticipated Endings (Hardcover)


Special Order—Subject to Availability
Bibliophiles, grab your glasses Here is a compendium of interesting- and often scandalous-facts and quips about the literary world. Featuring authors and tomes of yesteryear and yesterday, from Tolkien's Middle-earth to Jeffrey Eugenides's Middlesex, I Used to Knew That: Literature includes sections such as:
C. Alan Joyce works for WolframAlpha, a computational knowledge search engine. Alan was previously the Editorial Director for World Almanac Books, serving as chief editor for the #1 bestselling The World Almanac and Book of Facts. He created the new World Almanac blog in 2006. Alan was a freelance writer and editor, with years of experience in reference publishing-and a lifelong addiction to reference books of all kinds. He is the former Executive Editor of The New York Times Almanac and The New York Times Guide to Essential Knowledge. He lives with his wife and son in Illinois. Sarah Janssen is the Editor-in-Chief of The World Almanac and Book of Facts and other diverse titles, focusing primarily on arts and media, consumer information, geography, history, and sports. She currently lives in Brooklyn, NY.