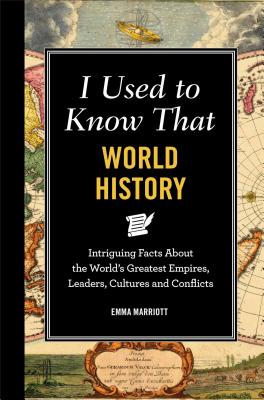 
Special Order—Subject to Availability
It can be difficult to keep different historical events and figures straight in your head, which is why I Used to Know That: World History presents major episodes in history with short, easily understood sections. Among the people, movements, and events covered are: - Ancient Greece and Rome-Learn about the birth of democracy and the death of the Roman Republic - The Middle Ages-From the Crusades to the Hundred Years War and the signing of the Magna Carta to the Black Plague - The Renaissance-A cultural revival that changed art, poetry, learning, and religion forever - The Revolutionary War-How America became independent; George Washington, the "father of the nation" - The Age of Empire-European colonialism in Africa and Asia; American expansion and the Civil War - Wars of the 20th Century-World War I and World War II; Hitler, Stalin, Churchill, and Roosevelt; the Cold War; the rise and fall of fascism and communism Packed with important facts and sweeping overviews of historical events, I Used to Know That: World History is essential reading for anyone who wants to understand the history of civilization and the geopolitical situation of today.
Emma Marriott is a freelance writer and editor. She has written two popular history books (I Used To Know That: History and Bad History) and edited a broad range of non-fiction titles for major UK publishers. She lives in the UK with her husband and three children.