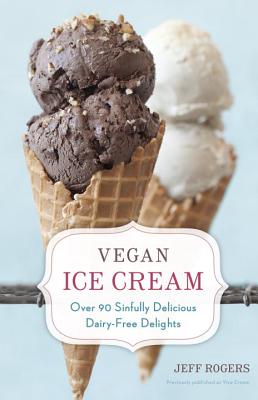 Whether you’re vegan, lactose intolerant, or following a dairy-free diet, you don’t have to miss out on one of the world’s favorite desserts. Although ice cream substitutes are available, none of them achieves the richness of the real thing or offers the breadth of delicious flavors—until now. Vegan Ice Cream offers decadent frozen alternatives that don’t rely on milk, cream, or refined white sugar. Instead, these luscious recipes use nut milks, fresh fruit, and natural sweeteners to create simple and inventive ice cream flavors, from old favorites like Chocolate Chip and Strawberry to exotic creations such as Pecan Pie, Pomegranate, Kiwi Mandarin, Piña Colada, Chai, Peanut Butter Chocolate Chip, Gingersnap, and many more.

This fully revised edition now features more than 90 recipes, including raw vegan ice creams and sauces, and full-color photography throughout. From the very first taste, you’ll be astonished at just how tasty and rich vegan ice cream can be. So make room in your freezer, and never miss out on the joys of ice cream again.

JEFF ROGERS grew up in Stowe, Vermont, where he became interested in food and tourism. After working at a popular restaurant, he moved to New Hampshire to study hotel and restaurant management at college. While pursuing a career in hotels, he honed his skills in the kitchen by experimenting and creating recipes of his own.

Adapting his diet to improve his health, he eventually became a vegan, eschewing all animal products. But he still craved the premium dairy ice creams he once ate and so used his kitchen gifts to experiment with creating a rich, gourmet vegan ice cream. As he became interested in the raw food movement, he also began to make ice creams with all raw ingredients.

Soon after beginning his vegan ice cream venture, Jeff began sharing his desserts with friends. A physician friend noted that in a world where people are trying to eat low-fat foods and fewer sweets, it was naughty of Jeff to create these decadent desserts, vegan or not. Thus, he was dubbed “The Naughty Vegan” and has used the nickname ever since.

Jeff has exhibited at WorldFest (Los Angeles) many times, as well as at Animal Rights National Conference 2007 (Los Angeles). He also had a booth at the 2001 PETA Gala in New York City and was a volunteer for Chef Tal Ronnen and others at the 2005 PETA 25th Anniversary Gala in  Los Angeles.

You can learn more about Jeff and his ice cream by visiting his website, TheNaughtyVegan.com. You’ll also find information on equipment (like how to choose an ice cream maker) and gadgets on this site.

Jeff actively promotes the awareness of the benefits of a plant-based diet so that people may make informed choices regarding their diet and health. Jeff has started a variety of projects, such as the SoyStache and Drumming Instead projects, as well as Jeff’s Buttons, and has created and maintains many websites. Jeff has been an avid photographer since high school and writes poetry. See his photography and learn more about his other projects at JeffRogers.us.
“Thanks to Jeff Rogers, you can make your own gourmet frozen desserts without dairy products.  And they’ll taste better than Ben & Jerry’s or  Baskin-Robbins ever did!”
— John Robbins, author of Diet for a New America

“Sinfully sumptuous, fun to make, and all vegan! That’s one improvement in ice cream that is long overdue.”
— Dr. Neal Barnard, author of Power Foods for the Brain