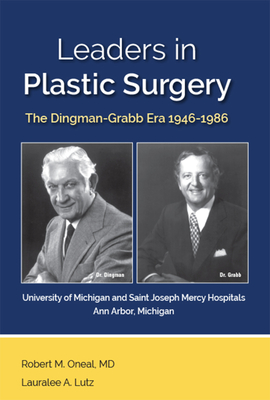 
Not On Our Shelves—Ships in 1-5 Days
(This book cannot be returned.)
This book traces the inspirational leadership of Reed O. Dingman, DDS, MD, and William C. Grabb, MD, and details the origins and growth of plastic and reconstructive surgery and the training of residents in Ann Arbor, Michigan, and the University of Michigan. It covers the years before and during the period of explosive innovations that have led the specialty to provide hope, correction, and rehabilitation to vast numbers of people suffering from a wide range of congenital abnormalities and acquired deformities. The authors, because of their long, personal association with plastic surgery in Ann Arbor, have brought to life the extensive accomplishments of the two leaders in terms of surgical techniques, surgical education, and important applied research while also documenting the many important contributions from the younger faculty and the trainees to the training program during those forty years. Many from that time frame have contributed their own memories, which has greatly enriched the documentation of an amazing history of an era past but not forgotten.
Robert M. Oneal, MD
Bob Oneal was born in Evanston, Illinois, and grew up in nearby Wilmette until age eighteen. After graduation from New Trier High School, he attended Dartmouth College in Hanover, New Hampshire, where he also completed his first two years in medical school, and then obtained his MD degree at Harvard Medical School in Boston. He completed a general surgery residency and then a plastic surgery residency in Ann Arbor, Michigan. He has been an active faculty member in the Section of Plastic Surgery at the University of Michigan since 1966, rising to the position of clinical professor and has been in private practice at Saint Joseph Mercy Hospital (SJMH) for forty years. Since retirement in 2006, he has continued teaching plastic surgery residents, living in Ann Arbor with his wife and author, Zibby Oneal.

Lauralee Lutz
Lauralee Lutz was born near State College, Pennsylvania, and grew in Connecticut, earning her BA in English and botany from Connecticut College in New London. Her early work includes being the horticultural advisor to a major Connecticut nursery where she also developed a newspaper column and radio program on gardening. Later she moved to Michigan where she worked in various hospital laboratories until joining the Section of Plastic Surgery as secretary and administrator. Her organizational skills and personality fit well in this niche for more than twenty years.