23 Things They Don't Tell You About Capitalism (Paperback) 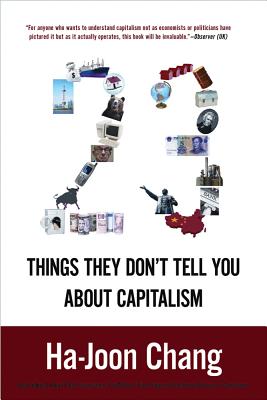 23 Things They Don't Tell You About Capitalism (Paperback)

"For anyone who wants to understand capitalism not as economists or politicians have pictured it but as it actually operates, this book will be invaluable."-Observer (UK)

If you've wondered how we did not see the economic collapse coming, Ha-Joon Chang knows the answer: We didn't ask what they didn't tell us about capitalism. This is a lighthearted book with a serious purpose: to question the assumptions behind the dogma and sheer hype that the dominant school of neoliberal economists-the apostles of the freemarket-have spun since the Age of Reagan.

Chang, the author of the international bestseller Bad Samaritans, is one of the world's most respected economists, a voice of sanity-and wit-in the tradition of John Kenneth Galbraith and Joseph Stiglitz. 23 Things They Don't Tell You About Capitalism equips readers with an understanding of how global capitalism works-and doesn't. In his final chapter, "How to Rebuild the World," Chang offers a vision of how we can shape capitalism to humane ends, instead of becoming slaves of the market.

Ha-Joon Chang, a Korean native, has taught at the Faculty of Economics, University of Cambridge, since 1990. He has worked as a consultant for numerous international organizations, including various UN agencies, the World Bank, and the Asian Development Bank. He has published 11 books, including Kicking Away the Ladder, winner of the 2003 Myrdal Prize. In 2005, Ha-Joon Chang was awarded the 2005 Leontief Prize for Advancing the Frontiers of Economic Thought.

Ha-Joon Chang teaches economics at Cambridge University. His books include Reclaiming Development (Zed 2004) and 23 Things They Don't Tell You about Capitalism (2010).

"Chang, befitting his position as an economics professor at Cambridge University, is engagingly thoughtful and opinionated at a much lower decibel level." - Time

"Chang presents an enlightening précis of modern economic thought-and all the places it's gone wrong, urging us to act in order to completely rebuild the world economy" - Publishers Weekly

"I doubt there is one book, written in response to the current economic crisis, that is as fun or easy to read as Ha-Joon Chang's 23 Things They Don't Tell you About Capitalism." - AlterNet Executive Editor Don Hazen