It's All About the Bike: The Pursuit of Happiness on Two Wheels (Paperback) 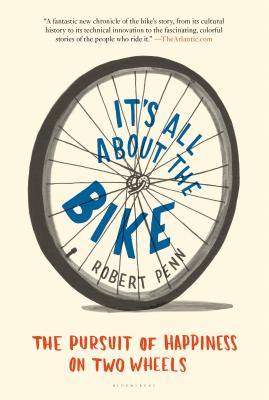 It's All About the Bike: The Pursuit of Happiness on Two Wheels (Paperback)

Robert Penn has saddled up nearly every day of his adult life. He rides to get to work, to bathe in air and sunshine, to travel, to go shopping, and to stay sane. He's no Sunday pedal pusher. So when the time came for a new bike, he decided to pull out all the stops and build his dream machine.

It's All About the Bike follows Penn's journey, but this book is more than the story of his hunt for two-wheeled perfection. En route, Penn brilliantly explores the culture, science, and history of the bicycle. From the United Kingdom to California, via Portland, Milan, and points in between, his trek follows the serpentine path of our love affair with cycling. On the way to building the perfect bike, Robert Penn brilliantly explains why we ride.

Robert Penn has worked as a lawyer, waiter, contractor, DJ, photographer, and journalist-and has biked to every single job. He writes for the Financial Times, the Observer, and Condé Nast Traveller, as well as a host of cycling publications. Penn lives in Wales with his wife and three children.

“It's All About the Bike puts [Penn's] vast and endearingly shaggy bicycle boffinry on a brisk round-the-world tour. Penn's energy never flags, and he knows when to change gears. The book is as a wheel-builder named Gravy described Penn's just completed, perfectly tuned, 28-spoked rear wheel: ‘Well, my friend. It's true.'” —New York Times Book Review

“A fantastic new chronicle of the bike's story, from its cultural history to its technical innovation to the fascinating, colorful stories of the people who ride it. [Penn] approaches his subject with equal parts humor, humility, and authoritative intelligence as he sets out to find himself a new bike. Entertaining, illuminating and beautifully illustrated, It's All About the Bike is a rare and precious portal to the heart and soul of bike culture and its surprising footprint--tireprint?--on all of culture.” —Atlantic

“The social history is snappy and his almost religious quest for ultimate craftsmanship is full of wit.” —Financial Times

“It's All About the Bike is more than just a gearhead's hejira, a globetrotter's catalog of componentry for the cycling crowd. … With humor and insight, Penn examines the historical, social, and cultural significance of the bike.” —Philadelphia Inquirer

“… if you've ever felt the wind rolling over your back as you tuck into a downhill or cleaned a log with a bunny hop, give it a shot. It's a quick read and even serious cyclists will learn something.” —Associated Press

“The author's ability to describe the joys of bicycling--the space for thought that the rhythm creates, the freedom of swooping down a hill, the satisfaction of having pedaled to the top--is one of the book's strengths, along with anecdotes of his experiences cycling around the world years earlier. If you don't long for your own bike at the end of this book, you will at least never look at one the same way again.” —Kirkus Reviews

“[Penn's] expertise is evident… These pages are a delight, packed with facts, informative illustrations and two-wheeled tales, they map a path into the heart of cycling culture.” —Publishers Weekly

“Gem of a book” —Economist

“The bike is the heart of our cycling lives, but it's a starting point for all sorts of journeys, literal and metaphoric. So Penn's title merits a tiny edit: it's not actually all about the bike, it's all about the stories behind the bike. But it's all the better for it.” —William Fotheringham, Road.cc

“Investigating the bicycle's long history while he's at it, Penn makes building one's own bicycle seem like the most natural, obvious and enjoyable thing to do.” —The National (UAE)

“Robert Penn relates his quixotic quest to procure the perfect bicycle with authority and humor, infusing his fluent narrative with thoughtful and provocative digressions that invoke technology, ergonomics, history, and social ideals. He richly deserves his $5,000 ‘dream machine.'” —David V. Herlihy, author of Bicycle: A History and The Lost Cyclist: The Epic Tale of an American Adventurer and His Mysterious Disappearance

“Robert Penn has assembled a splendid patchwork quilt of bicycle history, arcane workshops, and fascinating people into a passionate journey in search of his dream machine. After reading him, you'll never look at a bicycle the same way again and will enjoy riding yours even more. And you'll probably start your own velocopedal quest for perfection into the bargain. A simply lovely excursion not into bicyclists, but into BICYCLES. You must read this before you watch the Tour de France!” —Brian Fagan, Author of Elixir and The Great Warming, and an avid recreational cyclist with a Penn-like steel framed bike.

“The pages overflow with pioneers, mavericks and geniuses – certainly, it is hard to imagine anyone who reads this book being able to buy a bike ‘off the peg' again.” —Tim Lewis, Observer (UK)

“No matter how shiny and costly the item of bike bling, there is a back story, usually a good one. Artfully, Penn turns his quest for hardware ... into a worldwide spin around cycling and its culture.” —William Fotheringham, Observer (UK)

“[Penn] writes with authority, humour and refreshing candour ... A celebration of craftsmanship over technology and of a bygone era when things were built to last ... If Penn is to be believed, we are entering a golden age of cycling, when it really will be all about the bike once more.” —Sunday Telegraph (UK)

“[Penn] writes with a Bill-Brysonesque facility for concentrating a lot of information and research into an easy-to-read and surprisingly compelling tale. Best of all ... his account enriches your enjoyment of a ride.” —Tim Dawson, Sunday Times (UK)

“I've just spent a week pedalling slowly … with a copy of Penn's zealous eulogy in my pannier. His infectious admiration for the exhilarating sociability of cycling, coupled with reverence for quality craftsmanship, made highly engaging company ... appreciate the wit and enthusiasm of this unusual odyssey.” —James Urquhart, Independent (UK)

“A hell of a fun ride tracing the symbiotic relationship of bike and rider, this will have you thinking about how and why you ride.” —Library Journal (starred)

“Warning: do not even casually flick through this book if you have promised your significant other that you will not be cluttering up the garage/shed/landing/bedroom with any more bloody bike … Penn uses his own personal mission as a peg on which to hang a fascinating history of two-wheeled travel.” —Helen Pidd, Guardian Bike Blog (UK)