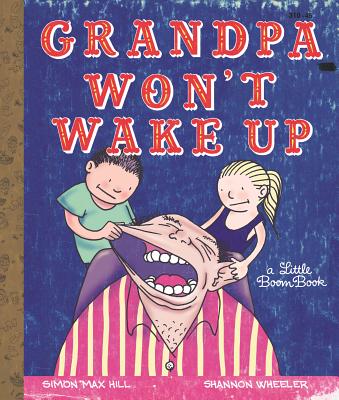 
Special Order—Subject to Availability
From ridiculous wardrobe changes to a pantless clown, a hilarious cartoon story about the lengths some people will go to try and wake up Grandpa!

This Li’l Golden Parody takes a look at the lighter side of discovering a cadaver in your living room. What ridiculous lengths will be reached in trying to wake up Grandpa, and were those fishnets really necessary? A hilarious cartoon book from simon max hill and Eisner Award-winning cartoonist Shannon Wheeler!
Debut author simon max hill owns & operates a casting company, providing actors and extras for critically acclaimed films like "Cold Weather" and "Wendy and Lucy" as well as the IFC comedy show "Portlandia". He is a graduate of Reed College in Portland, OR. Eisner-Award winning artist Shannon Wheeler is best known for his character Too Much Coffee Man, who has appeared internationally in newspapers, magazines and comic books. In 2006 a production of the “Too Much Coffee Man Opera” was held at the Portland Center of Performing Arts. His weekly strip Postage Stamp Funnies appeared in the print edition of The Onion until 2009, when his cartoons began appearing in The New Yorker. A hit collection of his rejected New Yorker Cartoons, I THOUGHT YOU WOULD BE FUNNIER, was published in 2010 by BOOM! Town.