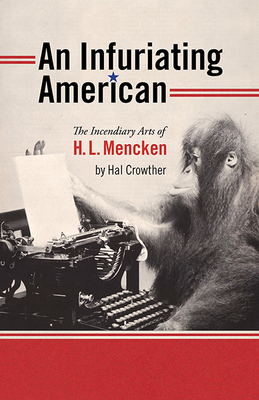 
Special Order—Subject to Availability
As American journalism shape-shifts into multimedia pandemonium and seems to diminish rapidly in influence and integrity, the controversial career of H. L. Mencken, the most powerful individual journalist of the twentieth century, is a critical text for anyone concerned with the balance of power between the free press, the government, and the corporate plutocracy. Mencken, the belligerent newspaperman from Baltimore, was not only the most outspoken pundit of his day but also, by far, the most widely read, and according to many critics the most gifted American writer ever nurtured in a newsroom—a vanished world of typewriter banks and copy desks that electronic advances have precipitously erased.

Nearly 60 years after his death, Mencken’s memory and monumental verbal legacy rest largely in the hands of literary scholars and historians, to whom he will always be a curious figure, unchecked and alien and not a little distasteful. No faculty would have voted him tenure. Hal Crowther, who followed in many of Mencken’s footsteps as a reporter, magazine editor, literary critic, and political columnist, focuses on Mencken the creator, the observer who turned his impressions and prejudices into an inimitable group portrait of America, painted in prose that charms and glowers and endures. Crowther, himself a working polemicist who was awarded the Baltimore Sun’s Mencken prize for truculent commentary, examines the origin of Mencken’s thunderbolts—where and how they were manufactured, rather than where and on whom they landed.

Mencken was such an outrageous original that contemporary writers have made him a political shuttlecock, defaming or defending him according to modern conventions he never encountered. Crowther argues that loving or hating him, admiring or despising him are scarcely relevant. Mencken can inspire and he can appall. The point is that he mattered, at one time enormously, and had a lasting effect on the national conversation. No writer can afford to ignore his craftsmanship or success, or fail to be fascinated by his strange mind and the world that produced it. This book is a tribute—though by no means a loving one—to a giant from one of his bastard sons.

Hal Crowther is a critic and essayist, and a former syndicated columnist and newsmagazine editor at Time and Newsweek. His most recent collection of essays, Gather at the River, was a finalist for the National Book Critics Circle prize in criticism. His syndicated columns won the Baltimore Sun's H. L. Mencken Writing Award in 1992. He is also the author of Unarmed But Dangerous and Cathedrals of Kudzu: A Personal Landscape of the South, winner of the Lillian Smith Book Award for commentary and the Fellowship Prize from the Fellowship of Southern Writers. He lives in Hillsborough, North Carolina, with his wife, the novelist Lee Smith.

“This is the sort of book H. L. Mencken himself would have written if he had set out to do a study of an earlier American writer—a book that is essentially an extended essay, insightful, witty, and very readable, one that gets at the meaning of Mencken better than many other books that are five times longer. Crowther gets Mencken just right, understands him fully, tells his story beautifully.”—Fred Hobson, author, Mencken: A Life


“H. L. Mencken was the perpetrator of some of the gaudiest tirades ever written in the great American language. He was a master of gale force invective and gobsmacking insult, a writer who leaves his readers laughing and appalled. Hal Crowther, one of the best American journalists of our time, brings Mencken roaring back to life in this compulsively readable and unforgettable portrait—and perp walk—of America’s fulminator-in-chief. An Infuriating American is a splendid achievement.”—Robert D. Richardson, author, First We Read, Then We Write: Emerson on the Creative Process