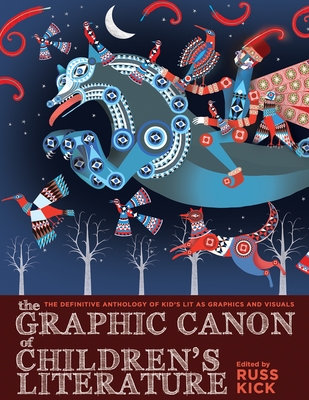 
Special Order—Subject to Availability
The original three-volume anthology The Graphic Canon presented the world's classic literature--from ancient times to the late twentieth century--as eye-popping comics, illustrations, and other visual forms. In this follow-up volume, young people's literature through the ages is given new life by the best comics artists and illustrators. Fairy tales, fables, fantastical adventures, young adult novels, swashbuckling yarns, your favorite stories from childhood and your teenage years . . . they're all here, in all their original complexity and strangeness, before they were censored or sanitized.
Founder of the website The Memory Hole, which archived sensitive and difficult to find official documents, RUSS KICK has devoted much of his life to digging up what others hope to keep buried. His bestselling anthologies, including You Are Being Lied To and Everything You Know Is Wrong, have sold over half a million copies. The New York Times has dubbed Kick "an information archaeologist," Details magazine described Kick as “a Renaissance man,” and Utne Reader named him one of its “50 Visionaries Who Are Changing Your World.” Russ Kick lives and works in Nashville, Tennessee, and Tucson, Arizona.
"A masterful success. If [Russ Kick would] unleash several other loose Canons, I’d be living happily ever after." —Print Magazine

"Some of history’s most skillful wielding of tales has refused to bend to the false divide between “children’s” and “adult” storytelling ... On the heels of the year’s best children’s books comes a magnificent embodiment of that ethos in The Graphic Canon of Children’s Literature" —Maria Popova, Brain Pickings

"These dazzlingly varied renderings run the gamut from haunting to comical while offering visceral reminders that children's stories are often densely layered, infinitely transposable, and peddle in imagery both macabre and whimsical. It is the unfettered imagination of these stories that make them not only wildly entertaining, but also vessels of forgotten truths." —Publishers Weekly (starred review)