If This Isn't Nice, What Is? (Even More) Expanded Third Edition: The Graduation Speeches and Other Words to Live By (Paperback) 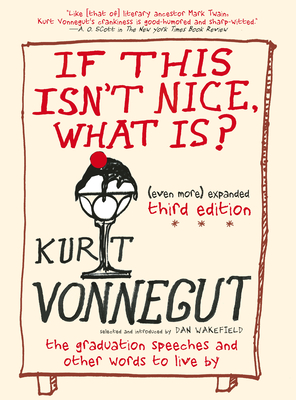 If This Isn't Nice, What Is? (Even More) Expanded Third Edition: The Graduation Speeches and Other Words to Live By (Paperback)


On Our Shelves Now at:
For this first-ever paperback edition of If This Isn’t Nice, What Is?, the beloved collection of Kurt Vonnegut’s campus speeches, editor Dan Wakefield has unearthed three early gems as a sort of prequel—the anti-war Moratorium Day speech he gave in Barnstable, Massachusetts, in October 1969, a 1970 speech to Bennington College recommending “skylarking,” and a 1974 speech to Hobart and William Smith Colleges about the importance of extended families in an age of loneliness.

Vonnegut himself never graduated college, so his words of admonition, advice, and hilarity always carried the delight, gentle irony, and generosity of someone savoring the promise of his fellow citizens—especially the young—rather than his own achievements.

Selected and introduced by fellow novelist and friend Dan Wakefield, the speeches in If This Isn’t Nice, What Is? comprise the first and only book of Vonnegut’s speeches. There are fourteen speeches, eleven given at colleges, one to the Indiana Civil Liberties Union, one on the occasion of Vonnegut receiving the Carl Sandburg Award, and now the anti-war speech he gave just months after the publication of Slaughterhouse-Five, as well as from related short personal essays—eighteen chapters in all. In each of these, Vonnegut takes pains to find the few things worth saying and a conversational voice to say them in that isn’t heavy-handed or pretentious or glib, but funny, joyful, and serious too, even if sometimes without seeming so.
Born in 1922 in Indianapolis, Indiana, KURT VONNEGUT was one of the few grandmasters of modern American letters. Called by the New York Times “the counterculture’s novelist,” his works guided a generation through the miasma of war and greed that was life in the U.S. in second half of the 20th century. After a stints as a soldier, anthropology PhD candidate, technical writer for General Electric, and salesman at a Saab dealership, Vonnegut rose to prominence with the publication ofCat’s Cradle in 1963. Several modern classics, including Slaughterhouse-Five, soon followed. Never quite embraced by the stodgier arbiters of literary taste, Vonnegut was nonetheless beloved by millions of readers throughout the world. “Given who and what I am,” he once said, “it has been presumptuous of me to write so well.” Kurt Vonnegut died in New York in 2007.

A longtime friend of Kurt Vonnegut’s, DAN WAKEFIELD is co-editor with Jerome Klinkowitz of Vonnegut’s Complete Stories, which the New York Times called “a fascinating portrait-of-the-artist-on-the-make in the booming 1950s.” Wakefield also edited and introduced Kurt Vonnegut: Letters. He is the author of the memoirs New York in the Fifties and Returning: A Spiritual Journey. His novel Going All the Way was made into a movie starring Ben Affleck. Dan Wakefield also created the NBC prime time series James at Fifteen. He is currently at work on a YA biography of Kurt Vonnegut for Seven Stories. He lives in Indianapolis, Indiana.
"If This Isn’t Nice, What Is? is a spectacular read in its entirety, brimming with Vonnegut’s unflinching convictions and timeless advice to the young." —Maria Popova, Brain Pickings

"If This Isn't Nice, What Is? is a blast of pure acid." —Entertainment Weekly

"The material here offers us a slightly different lens, a different window, extending across a wide range of time and geography, from Fredonia College in Fredonia New York in 1978 to Eastern Washington University in Spokane in 2004, and framed by not just Vonnegut’s sense of humor but also of humanity, his faith in our essential decency." —David Ulin, Los Angeles Times

"These delightful scattershot commencement speeches offer fresh clues to what lay behind Kurt Vonnegut's twinkly visage—clues that are well worth celebrating." —Peter Matthiessen