A Question of Power: Electricity and the Wealth of Nations (Hardcover) 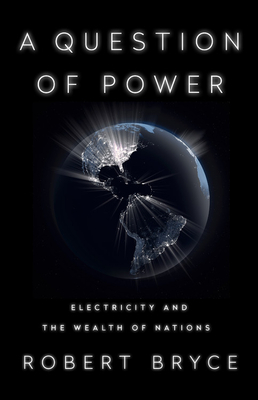 A Question of Power: Electricity and the Wealth of Nations (Hardcover)


Not On Our Shelves—Ships in 1-5 Days
Historically, it was guns, germs, and steel that determined the fates of people and nations. Now, more than ever, it is electricity.
Global demand for power is doubling every two decades, but electricity remains one of the most difficult forms of energy to supply and do so reliably. Today, some three billion people live in places where per-capita electricity use is less than what's used by an average American refrigerator. How we close the colossal gap between the electricity rich and the electricity poor will determine our success in addressing issues like women's rights, inequality, and climate change.
In A Question of Power, veteran journalist Robert Bryce tells the human story of electricity, the world's most important form of energy. Through onsite reporting from India, Iceland, Lebanon, Puerto Rico, New York, and Colorado, he shows how our cities, our money--our very lives--depend on reliable flows of electricity. He highlights the factors needed for successful electrification and explains why so many people are still stuck in the dark.
With vivid writing and incisive analysis, he powerfully debunks the notion that our energy needs can be met solely with renewables and demonstrates why--if we are serious about addressing climate change--nuclear energy must play a much bigger role.
Electricity has fueled a new epoch in the history of civilization. A Question of Power explains how that happened and what it means for our future.
Robert Bryce is the acclaimed author of five previous books, including Smaller, Faster, Lighter, Denser, Cheaper: How Innovation Keeps Proving the Catastrophists Wrong, and Power Hungry: The Myths of "Green" Energy and the Real Fuels of the Future. His articles have appeared in numerous publications, including the Wall Street Journal, New York Times, Austin Chronicle, Guardian, and National Review. He has given over 300 invited or keynote lectures to groups ranging from the Marine Corps War College to the Sydney Institute and has appeared on dozens of media outlets ranging from Fox News to Al Jazeera. Bryce is also the producer of a new feature-length documentary, Juice: How Electricity Explains the World. He lives in Austin, Texas, with his wife, Lorin.
"Shocking revelations about electricity.... A robust look at where the juice flows around the planet-and its planetary implications."—Kirkus Reviews

"Of all the aspects of modern life in the developed world, flipping a switch and having the lights come on ranks as one of the most underrated. It's good to be reminded, as Bryce does through powerful examples, that such convenience was unheard of until the late nineteenth century...In this wide-ranging history of electricity, power expert Bryce takes readers beyond the table lamp and microwave to demonstrate how crucial safe, dependable, and plentiful electricity is to a host of contemporary innovations, from cryptocurrency mining to marijuana cultivation."—Booklist