The Epic of the Buddha: His Life and Teachings (Paperback) 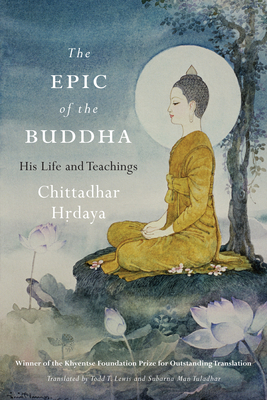 The Epic of the Buddha: His Life and Teachings (Paperback)

This award-winning book contains the English translation of Sugata Saurabha (“The Sweet Fragrance of the Buddha”), an epic poem on the life and teachings of the Buddha. Chittadhar Hṛdaya, a master poet from Nepal, wrote this tour de force while imprisoned for subversion in the 1940s and smuggled it out over time on scraps of paper. His consummate skill and poetic artistry are evident throughout as he tells the Buddha’s story in dramatic terms, drawing on images from the natural world to heighten the description of emotionally charged events. It is peopled with very human characters who experience a wide range of emotions, from erotic love to anger, jealousy, heroism, compassion, and goodwill. By showing how the central events of the Buddha’s life are experienced by Siddhartha, as well as by his family members and various disciples, the poem communicates a fuller sense of the humanity of everyone involved and the depth and power of the Buddha’s loving-kindness.

For this new edition of the English translation, the translators improved the beauty and flow of most every line. The translation is also supplemented with a series of short essays by Todd Lewis, one of the translators, that articulates how Hṛdaya incorporated his own Newar cultural traditions in order to connect his readership with the immediacy and relevancy of the Buddha’s life and at the same time express his views on political issues, ethical principles, literary life, gender discrimination, economic policy, and social reform.
Chittadhar Hṛdaya (1906–1982) was one of twentieth-century Nepal’s most eminent poets. Born into a Newar family in Kathmandu, he devoted his life to writing in his native language of Nepāl Bhāṣā (also called “Newari”). He composed this epic poem about the life of the Buddha while imprisoned for five years for publishing a poem in Newari that was regarded as subversive by the Nepalese government, smuggling it out on scraps of paper hidden in a tin box.

Todd T. Lewis is Professor of Religious Studies at the College of the Holy Cross.

Subarna Man Tuladhar taught at and served as the chief administrator of the Administrative Staff College in Kathmandu. For over four decades, he has also been a private scholar who published articles and short stories in Nepāl Bhāṣā (“Newari”), Nepali, and English. Since 1979, he has also taught several dozen foreign scholars doing research in the Kathmandu Valley. The growth in Newar studies in western academia in fields such as linguistics, anthropology, and religion is due, in considerable measure, to the exceptional work of Subarna Man Tuladhar as an instructor who pioneered the modern teaching of spoken Nepāl Bhāṣā.
“[This work] is not simply a window into another culture; it is an aesthetic experience that moves the reader to an enhanced understanding of the life of the Buddha.”—The Khyentse Foundation Committee Awarding the Prize for Outstanding Translation

“A superb contribution to Buddhist Studies, Lewis and Tuladhar have notonly translated from the Newari poetic vernacular an extraordinarily profound text by an outstanding figure in twentieth-century Nepali history, but in the process they have also managed to introduce many of the rich textures of lay Newari Buddhist culture. This is a perfect selection for a course on biographies of the Buddha or for Himalayan religious studies.”—John Clifford Holt, William R. Kenan Jr. Professor of Humanities in Religion and Asian Studies, Bowdoin College