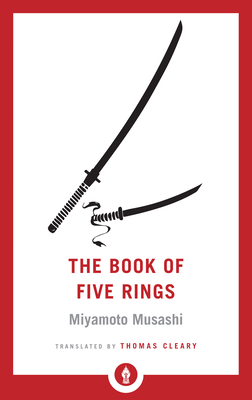 
In Stock—Click for Locations
One of the most insightful texts on the subtle arts of confrontation and victory to emerge from Asian culture, The Book of Five Rings analyzes the process of struggle and mastery over conflict that underlies every level of human interaction. Written by the renowned Japanese warrior Miyamoto Musashi in 1643, its principles for achieving success in combat have long been lauded not only for their applicability to the martial arts but to all aspects of life. This acclaimed translation from Thomas Cleary is immediately accessible, with an introduction that presents the spiritual background of the warrior tradition. Along with Musashi’s text, Cleary also translates another revered Japanese classic on leadership and strategy, The Book of Family Traditions on the Art of War by Yagyu Munenori, which highlights the ethical and spiritual insights of Taoism and Zen as they apply to the way of the warrior.

This book is part of the Shambhala Pocket Library series.

The Shambhala Pocket Library is a collection of short, portable teachings from notable figures across religious traditions and classic texts. The covers in this series are rendered by Colorado artist Robert Spellman. The books in this collection distill the wisdom and heart of the work Shambhala Publications has published over 50 years into a compact format that is collectible, reader-friendly, and applicable to everyday life.
Miyamoto Musashi, who lived in Japan in the 1600s, was an undefeated dueler, a masterless samurai, and an independent teacher. He spent the last decades of his life refining and teaching his military science.

Thomas Cleary holds a PhD in East Asian Languages and Civilizations from Harvard University and a JD from the University of California, Berkeley, Boalt Hall School of Law. He is the translator of over fifty volumes of Buddhist, Taoist, Confucian, and Islamic texts from Sanskrit, Chinese, Japanese, Pali, and Arabic.
"Embraced by many contemporary readers as a manual on how to succeed in life."— Library Journal