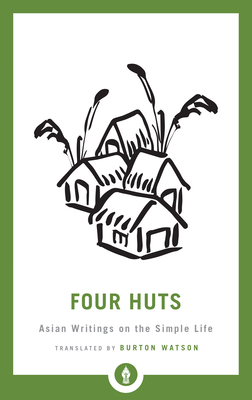 
Special Order—Subject to Availability
This beloved Eastern classic on living simply and in harmony with nature is back as part of the new Shambhala Pocket Library series.

The short works collected in Four Huts give voice to one of the most treasured aesthetic and spiritual ideals of Asia—that of a simple life lived in a simple dwelling. The texts were written between the ninth and the seventeenth centuries and convey each author’s underlying sense of the world and what is to be valued in it. Four Huts presents original translations by Burton Watson—one of the most respected translators of Chinese and Japanese literature. The qualities that emerge from these writings are an awareness of impermanence, love of nature, fondness for poetry and music, and an appreciation of the quiet life. Four Huts features eleven brush paintings by renowned artist Stephen Addiss.
Burton Watson (1925–2017) taught Chinese and Japanese literature at Columbia, Stanford, and Kyoto universities. He translated many books from Chinese and Japanese, and was one of the most well-known and respected translators in his field.

He received the Gold Medal Award of the Translation Center at Columbia University in 1979, the PEN Translation Prize in both 1982 and 1995. In 2015, he received the prestigious PEN/Ralph Manheim Medal for Translation. He died in 2017 in Chiba Prefecture, Japan.
"This beautifully rendered, expertly designed, small pocket volume is a compact little world in itself, just waiting to be opened."— The Japan Times