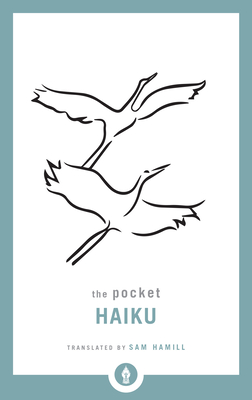 By Sam Hamill (Translated by)


Backordered
A collection of classical Japanese haiku selected and translated by one of America's premier poet-translators.

Haiku is one of the most popular and widely recognized poetic forms in the world due to its brevity, emotion, and astounding ability to capture the unique experience of a single moment. This collection, beautifully translated by Sam Hamill, compiles over two hundred haiku from classic Japanese literature written by masters of the genre like Bashō, Buson, and Issa. Based on images from nature, these poems express themes of joy, temporality, beauty, wonder, loneliness, and loss, inviting the reader to participate in the authentic experiences of these poets.
SAM HAMILL (1943-2018) translated more than two dozen books from ancient Chinese, Japanese, Greek, Latin, and Estonian and published fourteen volumes of original poetry. He was the recipient of fellowships from the National Endowment for the Arts, the Guggenheim Foundation, the Woodrow Wilson Foundation, and the Mellon Fund; and was awarded the Decoración de la Universidad de Carabobo in Venezuela, the Lifetime Achievement Award in Poetry from Washington Poets Association, and the PEN American Freedom to Write Award. He cofounded and served as Editor at Copper Canyon Press for thirty-two years and was the Director of Poets Against War.