The Yoga-Sutra of Patanjali: A New Translation with Commentary (Shambhala Pocket Library) (Paperback) 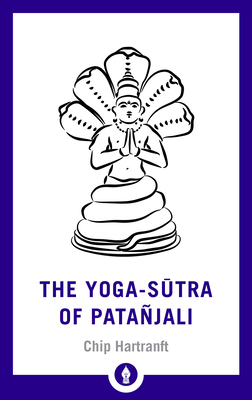 The Yoga-Sutra of Patanjali: A New Translation with Commentary (Shambhala Pocket Library) (Paperback)


Special Order—Subject to Availability
A classic work of Indian philosophy that succinctly spells out how the mind works and what is needed to attain liberation.

In 196 short aphorisms, this classic work of Indian philosophy succinctly spells out how the mind works and how it is possible to use the mind to attain liberation. The Yoga-Sūtra is a road map of human consciousness and a helpful guide to the mental states that one encounters in meditation, yoga, and other spiritual practices. Chip Hartranft’s translation and extensive, lucid commentary bring the text beautifully to life. He also provides useful auxiliary materials, including an afterword on the legacy of the Yoga-Sūtra and its enduring relevance for us today.
Chip Hartranft's work bridges the traditions of yoga and Buddhist meditation. He is the founding director of The Arlington Center, dedicated to the integration of yoga and dharma practice, and has taught a blend of movement and stillness to students in the Boston area since 1978. A student of yoga chiefly in the Krishnamacharya traditions, Chip has also practiced vipassana meditation for many years. He leads annual retreats in the United States and abroad, blending yoga movement, breathwork, and mindfulness. More information, including how to contact Chip Hartranft and The Arlington Center, can be found at www.arlingtoncenter.org.
"Extraordinarily clear. . . . Hartranft makes Patañjali's complications seem somehow obvious."—Shambhala Sun

"A Yoga Sutra for the twenty-first century . . . translated into plain (but not boring) accessible language. . . . If there's a more succinct explanation of the enduring value of Patañjali's work, I'd sure like to hear it."—Yoga Journal

"Chip Hartranft has given us a fresh, authoritative, and brilliant new translation of and commentary on the Yoga-Sutra, and an entire generation of American yogis should be deeply grateful. His work successfully combines intellectual precision with emotional accessibility—a powerful marriage seldom even attempted with this notoriously difficult text. Hartranft is careful always to leave Patañjali's own genius in the foreground, and as a result the astounding intellectual architecture of the Yoga-Sutra shines through. Bravo!"—Stephen Cope, author of Yoga and the Quest for the True Self

"Much of contemporary yoga in the West has emphasized breathing and the body. These invaluable practices have been separated from the comprehensive ethical and meditative approach of the great teacher Patañjali. Recently there has been an increased interest in correcting this limitation. Chip Hartranft's brilliant new translation of and commentary on Patañjali's masterpiece moves interested yogis decisively in this direction. It is a clear and inspiring work of immense value for all serious practitioners."—Larry Rosenberg, author of Breath by Breath and Living in the Light of Death