Gazing at the Moon: Buddhist Poems of Solitude (Paperback) 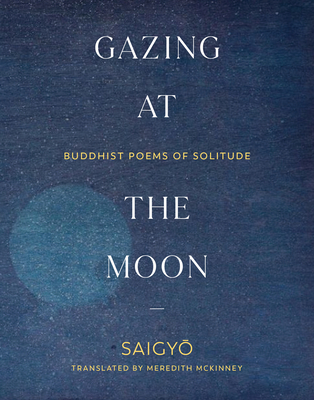 Gazing at the Moon: Buddhist Poems of Solitude (Paperback)

By Saigyo, Meredith McKinney (Translated by)


In Stock—Click for Locations
A fresh translation of the classical Buddhist poetry of Saigyō, whose aesthetics of nature, love, and sorrow came to epitomize the Japanese poetic tradition.

Saigyō, the Buddhist name of Fujiwara no Norikiyo (1118–1190), is one of Japan’s most famous and beloved poets. He was a recluse monk who spent much of his life wandering and seeking after the Buddhist way. Combining his love of poetry with his spiritual evolution, he produced beautiful, lyrical lines infused with a Buddhist perception of the world.

Gazing at the Moon presents over one hundred of Saigyō’s tanka—traditional 31-syllable poems—newly rendered into English by renowned translator Meredith McKinney. This selection of poems conveys Saigyō’s story of Buddhist awakening, reclusion, seeking, enlightenment, and death, embodying the Japanese aesthetic ideal of mono no aware—to be moved by sorrow in witnessing the ephemeral world.
MEREDITH MCKINNEY is an award-winning translator of classical and modern Japanese literature, whose translations include Sei Shônagon's eleventh-century classic The Pillow Book, and Kokoro and Kusamakura by the early modern novelist Natsume Sôseki. After living and teaching for around 20 years in Japan, she returned to Australia in 1998 and now lives near the small town of Braidwood, in southeastern New South Wales. She is currently an honorary associate professor at the Japan Centre, Australian National University.
“Exquisite.”—Buddhistdoor Global