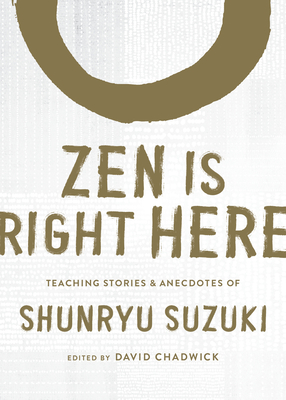 
On Our Shelves Now at:
Shunryu Suzuki’s extraordinary gift for conveying traditional Zen teachings using ordinary language is well known to the countless readers of Zen Mind, Beginner’s Mind. In Zen Is Right Here, his teachings are brought to life powerfully and directly through stories told about him by his students. These living encounters with Zen are poignant, direct, humorous, paradoxical, and enlightening; and their setting in real-life contexts makes them wonderfully accessible.

Like the Buddha himself, Suzuki Roshi gave profound teachings that were skilfully expressed for each moment, person, and situation he encountered. He emphasized that while the ungraspable essence of Buddhism is constant, the expression of that essence is always changing. Each of the stories presented here is an example of this versatile and timeless quality, showing that the potential for attaining enlightenment exists right here, right now, in this very moment.
Shunryu Suzuki (1904–1971) was one of the most influential spiritual teachers of the twentieth century and is truly a founding father of Zen in America. A Japanese priest of the Soto lineage, he taught in the United States from 1959 until his death. He was the founder of the San Francisco Zen Center and the Tassajara Zen Mountain Center. He is the author of Zen Mind, Beginner's Mind and Branching Streams Flow in the Darkness: Zen Talks on the Sandokai, and he is the subject of the biography Crooked Cucumber by David Chadwick.
"These brief personal stories, which are contributed anonymously, offer a strong sense of Suzuki Roshi, his teachings, and his enduring sense of humor."—Publishers Weekly

"Like a temple bell that strikes through the air to the heart of sound, these anecdotes and quotes offer humor, wisdom, enlightenment, brio, and a perfect example of a Zen life lived every day—that of Soto Zen priest Shunryu Suzuki who helped introduce thousands of Americans to Zen. . . . Flip through the book at random and you will find a gem on any given page. This book is an instruction manual for living your Zen outside the meditation hall."—Japan Times

"A delightful, thought-provoking, and eminently wise collection of teachings."—Spirituality and Health