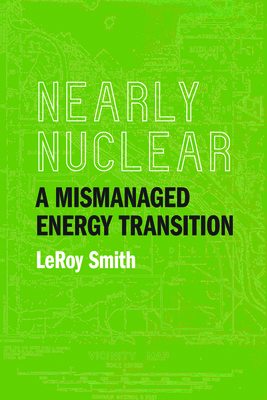 
Not On Our Shelves—Ships in 1-5 Days
When Consumers Power’s plan to build a nuclear power plant in Midland, Michigan, was announced in 1967, it promised to free Michigan residents from expensive, dirty, coal-fired electricity and to keep Dow Chemical operating in the state. But before the plan could be completed, the facility was called an engineering nightmare, a financial disaster, a construction boondoggle, a political headache, and a regulatory muddle. Most locals had welcomed nuclear power eagerly. Why, after almost twenty years and billions of dollars, did this promise of a high-tech, coal-free, prosperous future fail? And what lessons does its failure offer today as Americans try to develop a clean energy  economy based on renewable power? To answer these questions, energy consultant and author LeRoy Smith carefully traces the design and construction decisions made by Consumers Power, including its choice of reactor and its hiring of the Bechtel Corporation to manage the project. He also details the rapidly changing regulatory requirements and growing public concern about the environmental risks of nuclear power generation. An examination of both the challenges and importance of renewable energy, this book will be of value to anyone interested in grappling with the complexities of our ongoing efforts to eliminate fossil fuels in favor of clean renewable energy.
LEROY (LEE) SMITH served in the U.S. Navy as an engineering officer and then earned a master of science degree in geology. After leaving graduate school, he spent his entire career in the energy industry. He started as an exploration geologist and subsequently gained business experience serving as a corporate officer in a publicly traded company, a privately held company, and a limited partnership. Smith left his job as vice president of Energy Supply and Marketing at Midland Cogeneration Venture in 2004 to start a consulting firm, Optimal Value Energy. He now lectures and writes on energy topics. He has testified before the Michigan Public Service Commission, the Federal Energy Regulatory Commission, and the National Energy Board (since 2019 the Canadian Energy Regulator). He has written articles on hydraulic fracturing (fracking) and carbon dioxide sequestration in Michigan. He lives in Midland, Michigan, with his wife, H. J. Smith.
LeRoy Smith has taken a very complex history and brought it together in a readable and understandable way. The players involved over time were many and varied, but Smith puts them and their efforts in great historical, economical, and political perspective.—Michael Hayes, member, Michigan State Transportation Commission, and former member, Michigan House of Representatives