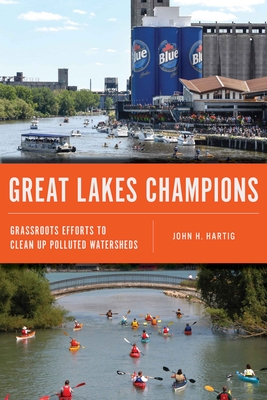 
On Our Shelves Now at:
The Great Lakes—containing one-fifth of the standing freshwater on earth, covering some 94,250 square miles with a combined 10,210 miles of shoreline—have suffered greatly from human use and abuse since the advent of the commercial fur trade in the late 1600s. Logging destroys or degrades habitats, urbanization and industrialization pour human and industrial wastes into the water, fertilizers flowing off farm fields feed algae that suffocate other creatures, and ships bring in exotic species that decimate the lakes’  biodiversity. In 1985 when the International Joint Commission identified more than forty pollution hotspots around the lakes, few people had faith the Areas of Concern would be  cleaned up in their lifetime. Indeed, aquatic ecosystem restoration is extremely difficult: only nine of these hotspots have been removed from the infamous list. But progress is being made, and at the helm are local champions, people with a profound love of the region who lead by example and build broad, diverse coalitions in order to realize a common vision. The stories of fourteen of these champions are told here to inspire necessary action to care for the place they call home, so it may be a home to many living creatures for ages yet to come.
John H. Hartig is refuge manager for the Detroit River International Wildlife Refuge and serves on the Detroit Riverfront Conservancy board of directors. He is an award-winning author on conservation science.
“Everyone who cares about their place in the Great Lakes needs to know that anyone with passion, vision, collegiality, courage, and integrity can be a leader in their community. In telling the stories of these fourteen remarkable people, John H. Hartig has given future Great Lakes champions exactly the kind of inspiration that they are going to need.”
—CHRIS MCLAUGHLIN, executive director, Bay Area Restoration Council, Ontario