The Bloodless Boy (A Hunt and Hooke Novel #1) (Paperback) 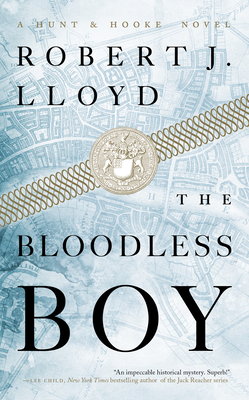 The Bloodless Boy (A Hunt and Hooke Novel #1) (Paperback)

This is book number 1 in the A Hunt and Hooke Novel series.

Part Wolf Hall, part The Name of the Rose, a riveting new literary thriller set in Restoration London, with a cast of real historic figures, set against the actual historic events and intrigues of the returned king and his court …

The City of London, 1678. New Year’s Day. Twelve years have passed since the Great Fire ripped through the City. Eighteen since the fall of Oliver Cromwell and the restoration of a King. London is gripped by hysteria, and rumors of Catholic plots and sinister foreign assassins abound.

When the body of a young boy drained of his blood is discovered on the snowy bank of the Fleet River, Robert Hooke, the Curator of Experiments at the just-formed Royal Society for Improving Natural Knowledge, and his assistant Harry Hunt, are called in to explain such a ghastly finding—and whether it's part of a plot against the king. They soon learn it is not the first bloodless boy to have been discovered.

Meanwhile, that same morning Henry Oldenburg, the Secretary of the Royal Society, blows his brains out, and a disgraced Earl is released from the Tower of London, bent on revenge against the King, Charles II.

Wary of the political hornet’s nest they are walking into – and using scientific evidence rather than paranoia in their pursuit of truth – Hooke and Hunt must discover why the boy was murdered, and why his blood was taken.

The Bloodless Boy is an absorbing literary thriller that introduces two new indelible heroes to historical crime fiction. It is also a powerfully atmospheric recreation of the darkest corners of Restoration London, where the Court and the underworld seem to merge, even as the light of scientific inquiry is starting to emerge …
Robert Lloyd, the son of parents who worked in the British Foreign Office, grew up in South London, Innsbruck, and Kinshasa.  He studied for a Fine Art degree, starting as a landscape painter, but it was while studying for his MA degree in The History of Ideas that he first read Robert Hooke's diary, detailing the life and experiments of this extraordinary man. After a 20-year career as a secondary school teacher, he has now returned to painting and writing. The Bloodless Boy is his debut novel. He is at work on a sequel.
A New York Times Best New Historical Novel of 2021

"Potent... Lloyd anchors his thriller’s plot with a real-life historical figure, the polymath natural philosopher Robert Hooke, and gives the bulk of the sleuthing to Hooke’s appealing assistant, Harry Hunt, who delivers a fast-paced finale in a desperate attempt to forestall yet another — and politically disastrous — murder." - The New York Times Book Review

“Wonderfully imagined and wonderfully written, this is an impeccable historical mystery, and also a timely and timeless parable about working inside a paranoid and repressive society. Superb!” —Lee Child

"Lloyd's stunning debut and series launch makes the complex politics of the time feel immediate while integrating them into an engrossing whodunit." - Publishers Weekly, Starred Review

"Gripping . . . the first in a series that promises to be worth following.” —The Sunday Times

“The Bloodless Boy is hugely entertaining. Robert J Lloyd conjures up a wonderfully convincing Restoration London and the mystery romps along. And the good news is that it is the first in a series."-- The Times Crime Club:

"A fantastic historical mystery set in an utterly fascinating milieu. I really enjoyed this one.” —Adrian McKinty, New York Times bestselling author of The Chain

'An intriguing confection of history and fiction. The novel cleverly combines murder investigation and political intrigue with the pioneering scientific work of Robert Hooke and his colleagues at the Royal Society. Bravo!’—Andrew Taylor, author of The Ashes of London

“Absolutely gripping. A wonderfully researched and thrilling ride through one of London's most fascinating epochs.” —Cate Quinn, author of Black Widows

“The Bloodless Boy is a gripping and beautifully written history-mystery which brims with atmosphere and menace.” —Martin Edwards, Edgar Award-winning author of The Gallows Court

“Lloyd fuses an infectious love of language and history with spectacular action, an irresistible young hero, and an ingenious mystery. What a delightfully erudite, impeccably well-crafted novel.” —Dan Mayland, author of The Doctor of Aleppo

“It’s extremely difficult to pull off a historical crime novel that manages to be accurate enough, exciting enough and smart enough to satisfy as thoroughly as The Bloodless Boy, but Robert J. Lloyd makes it look easy.” —Christopher Fowler, author of the Bryant and May mysteries

“The Bloodless Boy is a cracker that had me gripped from the first chapter and me on edge until the end.” —Julian Woodford, author of The Boss of Bethnal Green

“Lloyd really excels in his descriptions of London, and his understanding of Seventeenth Century science and medicine at the dawn of the Enlightenment.” —Jemahl Evans, author of the Sir Blandford Candy Adventure Series.