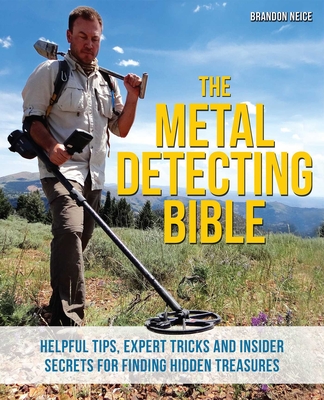 
Not On Our Shelves—Ships in 1-5 Days
Get started with metal detecting or improve your treasure hunting skills with the ultimate A-to-Z guide revealing everything you need to know to become a metal-detecting expert.

Nothing is as thrilling as finding cool (and often valuable) stuff right under your feet. So grab this guide and get ready to dig up more and more finds. Packed with helpful information on making your search successful and exciting, The Metal Detecting Bible serves up step-by-step instructions, illustrations, and useful photos that can turn you into a professional treasure hunter.

From quick-start tips for novices to insider secrets for the most experienced hobbyists, this hands-on guide is the ultimate resource on all aspects of metal detecting.

• Choose the best metal detector
• Learn where to search and why
• Practice appropriate swing techniques
• Integrate advanced GPS technology
• Scout out beaches, parks and historic sites
• Gain permission to hunt on private property
• Identify antique coins, relics and jewelry
• Use handy target recovery tools
• Clean and safely preserve your finds
• Sell your finds for a profit
Brandon Neice was raised in the historically rich, gold-bearing area of California’s Placer County. At a young age, he became interested in gold prospecting and treasure hunting. Brandon’s father, an experienced recreational prospector and avid outdoorsman, facilitated his interest by taking him on outdoor adventures throughout the northwestern US. Later in life, Brandon moved to Idaho, where he met a friend who was using metal detectors to find gold nuggets.

Brandon purchased his first metal detector in 2003 and began searching for treasures near and far. Since then, he has traveled the world, unearthing rare and valuable metals of all sorts—from coins and relics dating to 50 BC to gold nuggets and meteorites from space. He’s gained millions of views on his YouTube channel, DrTones24K, that follows him and a team of detecting experts on their treasure-hunting adventures. Brandon has also assisted archaeologists in locating items of interest on historic properties, such as James Madison’s Montpelier estate.

Some of his most accomplished finds include a 1901 S Barber Quarter (considered to be one of the rarest US silver coins produced in the twentieth century), a 50 BC Celtic gold stater, and a rare Norman-era ceremonial mount with gold-laced surfaces and an enameled crucifix design.