The Case of the Shoplifter's Shoe: A Perry Mason Mystery (Paperback) 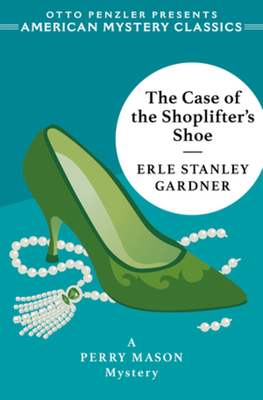 The Case of the Shoplifter's Shoe: A Perry Mason Mystery (Paperback)

After a thieving woman is accused of murder, it’s up to Perry Mason to prove her innocent

Sleuthing attorney Perry Mason can’t resist a good mystery, so when he sees an older woman being accused of shoplifting during a department store outing with his assistant, Della Street, he doesn’t hesitate to intervene. Armed with an assumption of innocence and the legal acumen to silence her accuser, Mason leaps to the woman’s defense—until her niece appears, acknowledging her aunt’s guilt, and pays for the stolen items.

Soon thereafter, Aunt Sarah is accused of stealing a valuable set of diamonds, and her niece, Virginia, enlists Mason’s aid. The man who left the jewels in Sarah’s care insists that she didn’t take them, but when he turns up dead, she’s left with nobody to vouch for her. Nobody, that is, but Perry Mason—expert in the art of defending the innocent.

The thirteenth novel in the bestselling Perry Mason series, The Case of the Shoplifter’s Shoe is an exemplary episode for the character, featuring the complex plots, snappy dialogue, and break-neck pacing that make the novels perennial favorites of mystery fans everywhere.

Includes discussion guide questions for use in book clubs.

Erle Stanley Gardner (1889-1970) was the best-selling American author of the 20th century, mainly due to the enormous success of his Perry Mason series, which numbered more than 80 novels and inspired a half-dozen motion pictures, radio programs, and a long-running television series that starred Raymond Burr. Having begun his career as a pulp writer, Gardner brought a hard-boiled style and sensibility to the early Mason books, but gradually developed into a more classic detective story novelist, showing enough clues to allow the astute reader to solve the mystery. For more than a quarter of a century he wrote more than a million words a year under his own name and numerous pseudonyms, the most famous being A.A. Fair.

Otto Penzler, the creator of American Mystery Classics, is also the founder of the Mysterious Press (1975); Mysterious Press.com (2011), an electronic-book publishing company; and New York City’s Mysterious Bookshop (1979). He has won a Raven, the Ellery Queen Award, two Edgars (for the Encyclopedia of Mystery and Detection, 1977, and The Lineup, 2010), and lifetime achievement awards from Noircon and The Strand Magazine. He has edited more than 70 anthologies and written extensively about mystery fiction.
Mason displays his usual brilliant cross-examination skills as the action builds to a highly satisfying climax. Gardner’s cleverness and mastery of trial details are amply on display in this entry in the American Mystery Classics series.
— Publishers Weekly

No one has ever matched Gardner for swift, sure exposition.
— Kirkus

While we wait to watch Mason eviscerate his opponent, we can savor a vanished way of talking. There's something charming about hearing a movie called a "picture show." As a kind of origin story, this one's a treat.
— Booklist

With Perry Mason, Erle Stanley Gardner introduced to American letters the notion of the lawyer as a hero—and a detective—which were remarkable innovations. He even gave defense lawyers a good name to boot. His Mason books reaming tantalizing on every page and brilliant.
— Scott Turow, author of Presume Innocent and Testimony