Hitler’s Boy Soldiers: How My Father’s Generation Was Trained to Kill and Sent to Die for Germany (Hardcover) 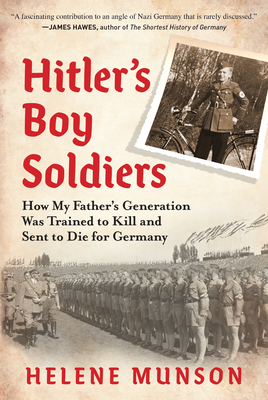 Hitler’s Boy Soldiers: How My Father’s Generation Was Trained to Kill and Sent to Die for Germany (Hardcover)


On Our Shelves Now at:
A shocking personal memoir and a new perspective on World War II that follows the author’s journey in the footsteps of her father’s youth as one of Hitler’s child soldiers—bringing to light the untold story of the 300,000 German children who served in Hitler’s army

When Helene Munson finally reads her father, Hans Dunker’s, wartime journal, she discovers secrets he kept buried for seven decades. This is no ordinary historical document but a personal account of devastating trauma.

During World War II, the Nazis trained some three hundred thousand German children to fight—and die—for Hitler. Hans was just one of those boy soldiers. Sent to an elite school for the gifted at nine years old, he found himself in the grip of a system that substituted dummy grenades for Frisbees. By age seventeen, Hans had shot down Allied pilots with antiaircraft artillery. In the desperate, final stage of Hitler’s war, he was sent on a suicide mission to Závada on the Sudetenland front, where he witnessed the death of his schoolmates—and where Helene begins to retrace her father’s footsteps after his death.

As Helene translates Hans’s journal and walks his path of suffering and redemption, she uncovers the lost history of an entire generation brainwashed by the Third Reich’s school system and funneled into the Hitler Youth.

A startling new account of this dark era, Hitler’s Boy Soldiers grapples with inherited trauma, the burden of guilt, and the blurred line between “perpetrator” and “victim.” It is also a poignant tale of forgiveness, as Helene comes to see her late father as not just a soldier but as one child in a sea of three hundred thousand forced onto the wrong side of history—and left to answer for it.
Helene Munson grew up in Brazil, Liberia, and Germany, spending most of her adult life in New York and Berlin. She writes short stories in English and German, which have been published in magazines and anthologies. Inspired by her family history, her masters degree was partly about the impact of armed conflicts on children. She lives outside New York City.
Selection in the History Book Club and Military Book Club

“A fascinating contribution to an angle of Nazi Germany that is rarely discussed.”—James Hawes, author of The Shortest History of Germany

“This extraordinary book tells the previously untold story of what happened to Germany’s children during the Third Reich and WWII as seen from the unique perspective of a German family and through their collected documents.”—Roger Rosenblatt, author of Children of War, essayist for PBS Newshour and Time Magazine

“In his private diary, seventeen-year-old Hans Dunker described daily life as a student at an elite Nazi high school who is suddenly thrust into Hitler’s bloody battle: ‘Then comes a beautiful, bright Sunday with the sun shining on the horror and madness of human self-destruction.’ Only after seventy years did his daughter, Helene Munson, muster the courage to open it. Thankfully for her, she finds that he committed no atrocities. Thankfully for us, she has now shared this of-the-moment diary as she investigates the little-known story of Hitler’s Boy Soldiers.”—Peter Hellman, author of In Vino Duplicitas and Auschwitz Explained to My Child

“An exceptionally well-written and moving book. We all might pause to say a prayer for the ‘six Feldafing boys’ and the millions of other young men and women whose lives have been brutally taken in the horror of war.”—Dr. William M. Fowler, professor of history, Northeastern University, and author

“Hitler’s Boy Soldiers by Helene Munson reveals that the Nazis trained 300,000 children as soldiers, including the author’s father, who was drafted at age 15 and sent to the front lines in the late stages of the war.” – Publishers Weekly