The Jewish Marriage Contract: A Study in the Status of the Woman in Jewish Law (Paperback) 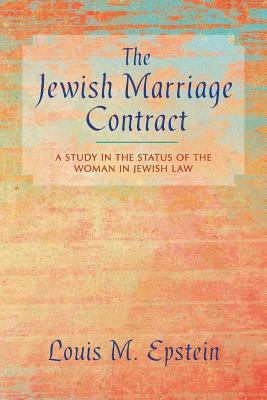 The Jewish Marriage Contract: A Study in the Status of the Woman in Jewish Law (Paperback)


Not On Our Shelves—Ships in 1-5 Days
(This book cannot be returned.)
A cogent and compelling examination of the history and significance of the Jewish marriage contract, the Ketubah, with extensive notes in Hebrew and English. Originally published: New York: Jewish Theological Seminary, 1927. xvii, 316 pp. As Epstein notes in the preface, the Ketubah offers an excellent introduction to the character of Jewish marriage because it is not a sentimental, rhetorical or subjective text. Instead, it is "a legal document embodying the essential points agreed upon by the parties and sanctioned by the law as to the manner of their living together as husband and wife" 2]. This work will interest those concerned with property rights, family, divorce, and the evolution of betrothal and marriage. "It constitutes within itself a combination of civil and ceremonial law, it mirrors Judaism in its inner rather than outer relations, and more than any section of the law, it has defined the ravages of time and hostile conditions, remaining inviolable and fully valid to the day." --Preface, VIII Louis M. Epstein 1887-1949] was among the most distinguished scholars in the Conservative movement, and was the rabbi at Congregation Kehillath Israel in Brookline, Massachusetts from 1925-1947. He was born in Lithuania, and received his undergraduate degree at Columbia University and his rabbinical diploma from the Jewish Theological Seminary of America in 1913. He is the author of Marriage Laws in the Bible and the Talmud (1942) and Sex, Laws and Customs in Judaism (1948).