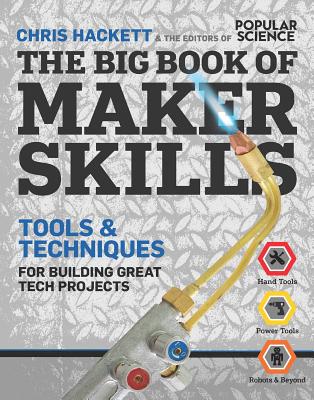 
Backordered
Makers, get ready. This is your ultimate, must-have, tip-packed guide for taking your DIY projects to the next level—from basic wood- and metalworking skills to plugged-in fun with power tools, from cutting-edge electronics play to 3-D printing wizardry. Join Chris Hackett, Popular Science intrepid DIY columnist and star of the Science Channel’s Stuck with Hackett , on a rummage through the toolbox of yore—and a foray into the technologies of the future.

HAND TOOLS
A classic is a classic for a reason. Learn to build your own metal forge, screen-print whatever you want, swing a hammer better than your ancestors, and repurpose what Hackett calls “obtainium”—but what others might call trash—into your own mad-scientist creations.
POWER TOOLS
Discover the supreme joy that is angle-grinding, rig your own welding machine out of a junked car battery or three, and meet and master a whole host of electronic gadgets—LEDs, piezo buzzers, solar panels, and more.
ROBOTS & BEYOND
When it comes to making, there’s a whole new skillset in town. Get started with CNC milling, laser-cutting, programming microcontrollers, and 3D printing in a chapter that’s all about building what’s next.
MUCH MORE
Setting up a hackerspace, drones and space exploration tools, circuitry basics, sourcing and crowdsourcing and biotechnology- just to name a few more. You name it; it’s probably in this book.

Packaged in a durable, wipe-clean flexicover with metallic corner-guards, this practical manual withstands heavy-duty use indoors and out.
Hackett is an artist; the founder and director of Brooklyn’s maker combine, the Madagascar Institute; occasional television presenter; adjunct professor at New York University; and contributing editor to Popular Science. Hackett likes his coffee strong and his physics Newtonian, and he is a firm believer in “build it, then measure it.”

Founded in 1872, Popular Science is the world’s largest science and technology magazine, with 6.7 million readers. Each month, the magazine reports on the intersection of science and everyday life, and its popular Manual column offers tons of fascinating DIY tech projects for both beginning tinkerers and pro builders alike. Popular Science is one of the oldest continuously published magazines in the United States, and is published in five languages and nine countries. The magazine’s Web site, popsci.com, has been readers’ first stop for up-to-the-minute science news since the site first went live in 1996.