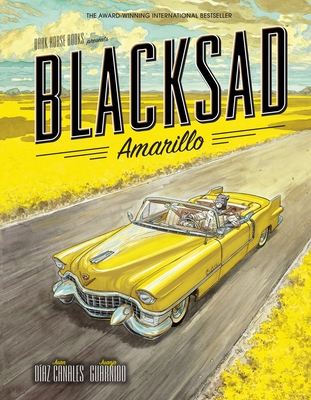 
Not On Our Shelves—Ships in 1-5 Days
Hardboiled feline detective John Blacksad is back in the latest tour de force from the multiple-award winning duo of writer Juan Díaz Canales and artist Juanjo Guarnido!

Taking a much-needed break after the events of A Silent Hell, Blacksad lands a side job driving a rich Texan's prized yellow Cadillac Eldorado across 1950s America, hitting the back roads from New Orleans to Tulsa. But before long, the car is stolen and Blacksad finds himself mixed up in another murder, with roughneck bikers, a shifty lawyer, one down-and-out Beat generation writer, and some sinister circus folk! When John Blacksad goes on the road, trouble is dead ahead!
Born in Madrid in 1972, Juan Díaz Canales began his career at 18 for the Spanish animation studio Lápiz Azul, where he and Juanjo Guarnido first met. After Guarnido moved to Paris, the two traded ideas about the project that became Blacksad, a series of graphic albums written by Díaz Canales as a 1950s noir. The writer now juggles scripting for comics and animation as well as directing for television. While Blacksad was Canales’s first published comics work, he has collaborated with several artists, most recently with Antonio Lapone on the Eisner-nominated Gentlemind, co-written with Díaz Canales’s wife Teresa Valero.

Juanjo Guarnido was born in Granada, Spain, in 1967. After meeting Juan Díaz Canales at the Lápiz Azul animation studio, Guarnido moved to Paris in 1993 to join the Walt Disney Studios satellite in Montreuil, where he worked as an animator. While there, Guarnido began drawing his first graphic album, working long-distance with Díaz Canales toward the 2000 publication of Blacksad: Somewhere within the Shadows.  The overwhelming success of the title has allowed Guarnido to take on other projects, like Sorcelleries with writer Teresa Valero and the recent best-selling Les Indes Fourbes with writer Alain Ayroles.