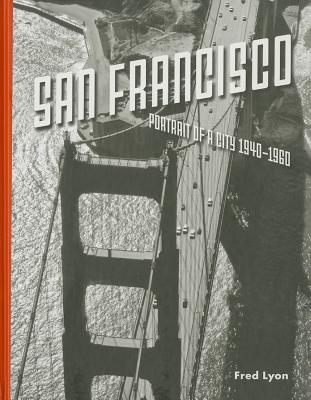 
Special Order—Subject to Availability
With a landmark around every corner and a picture perfect view atop every hill, San Francisco might be the world's most picturesque city. And yet, the Golden City is so much more than postcard vistas. It's a town alive with history, culture, and a palpable sense of grandeur best captured by a man known as San Francisco's Brassai. Walking the city's foggy streets, the fourth-generation San Franciscan captures the local's view in dramatic black-and-white photos— from fog-drenched mornings in North Beach and cable cars on Market Street to moody night shots of Coit Tower and the twists and turns of Lombard Street. In San Francisco, Portrait of a City 1940–1960, Fred Lyon captures the iconic landscapes and one-of-a-kind personalities that transformed the city by the bay into a legend. Lyon's anecdotes and personal remembrances, including sly portraits of San Francisco characters such as writer Herb Caen, painters Richard Diebenkorn and Jean Varda, and madame and former mayor of Sausalito Sally Stanford add an artist's first-hand view to this portrait of a classic American city.
Fred Lyon has been photographing for 7 decades now, fourth generation San Franciscan, and found his calling in his youth as an apprentice at Gabriel Moulin's Studio before enrolling in Art Center in Los Angeles. Lyon has done photographic work for the Navy during WWII and for numerous fashion and home and garden magazines. Lyon's exhibitions include Palace Legion of Honor, Arts Institute in Chicago, and a LIFE magazine retrospective.
"Stunning.. photographer Fred Lyon, now 90, magnificently captured the enticing noir decadence of San Francisco's Barbary Coast and the majesty of the rest of the city." -BoingBoing Holiday Gift Guide

"Lyon captures the seaside metropolis decades before the dot-coms invaded and rents skyrocketed, documenting everywhere from Chinatown's fish markets to Telegraph Hill's gorgeous homes to sailboats near Alcatraz to Union Square flower stands. Most compelling of all are his images of the city's residents: fishermen, artists, jazz musicians, ballerinas, clowns outside strip clubs, Lion dancers on the Chinese New Year; kids riding makeshift skateboards in the streets." -FastCompany.com

"Barkers and sidewalk vendors, fishermen and longshoremen. These are people one doesn't see much anymore in San Francisco, but they fill the pages of Fred Lyon's vibrant and invaluable new book of photography, San Francisco, Portrait of a City 1940-1960" -SFGate.com

"At 90, Fred Lyon is a legendary San Franciscan photographer. He is now known for capturing the ethereal feel of the city and its people, but in the 1940s and '50s, Lyon was scrabbling to gain a footing in the magazine industry. Luckily, it was a good time to do so: San Francisco was entering a new golden age, consumed by a post-World War II hunger for creative expression. His new book, San Francisco, is a portrait of the city bursting with life, from its streets to its stores to its grandest palaces of art and culture." -Slate.com