The Book of Circles: Visualizing Spheres of Knowledge: (with over 300 beautiful circular artworks, infographics and illustrations from across history) (Hardcover) 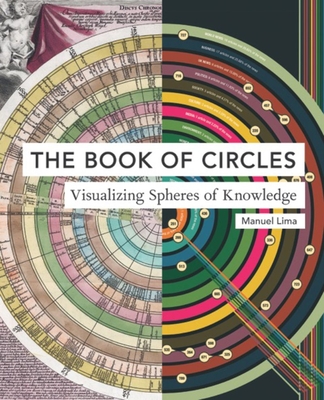 The Book of Circles: Visualizing Spheres of Knowledge: (with over 300 beautiful circular artworks, infographics and illustrations from across history) (Hardcover)


Not On Our Shelves—Ships in 1-5 Days
In this follow-up to his hugely popular The Book of Trees and Visual Complexity, Manuel Lima takes us on a lively tour through millennia of circular information design. Three hundred detailed and colorful illustrations from around the world cover an encyclopedic array of subjects—architecture, urban planning, fine art, design, fashion, technology, religion, cartography, biology, astronomy, and physics, all based on the circle, the universal symbol of unity, wholeness, infinity, enlightenment, and perfection. Clay tokens used by ancient Sumerians as a system of recording trade are juxtaposed with logos of modern retailers like Target; Venn diagrams are discussed alongside the trefoil biohazard symbol, symbols of the Christian trinity, and the Olympic rings; and a diagram revealing the characteristics of ten thousand porn stars displays structural similarities to early celestial charts placing the earth at the center of the universe.

Lima's introduction provides an authoritative history of the circle, and a preface describes his unique taxonomy of the many varieties of circle diagrams, rounding out this visual feast for infographics enthusiasts.
A Fellow of the Royal Society of Arts and praised by Wired Magazine "as the man who turned data into art", Manuel Lima is the founder of VisualComplexity.com, Design Lead at Google, and a regular teacher of data visualization at Parsons School of Design as well as a frequent speaker at universities and events worldwide.
"Why do we find circles so beautiful? A new book of illustrations celebrates the beauty and versatility of circles. Author and designer Manuel Lima explains why we're so attracted to this most simple of shapes." - BBC Focus

"A collection of fascinating facts full of circular diagrams about circles themselves, and the shape's connection to subjects as wide-ranging as architecture, urban planning, fine art, design, technology, religion, and science."
- BuzzFeed

"Why are we so surrounded by these rounded figures? Author Manuel Lima seeks to answer this question and more with The Book of Circles: Visualizing Spheres of Knowledge, which delves deeply into circular information design." - Print Magazine

"In a new book called The Book of Circles, the data designer Manuel Lima looks to history and evolutionary science to explain why people like circles so much, using his research to create a taxonomy of approximately 300 images of circles that date from thousands of years ago up to the present day. The images themselves form a compelling argument about just how ingrained the circle is in the human mind--and Lima gives some compelling explanations for it." - Fast Co. Design

"The Book of Circles: Visualizing Spheres of Knowledge is a compendium of circular infographics and designs created throughout centuries." - Mental Floss

"In his new book, The Book of Circles, Manuel Lima investigates how the shape has been employed throughout the ages. Like his first book, Circles is a thorough taxonomy of circular infographics, but it's also a deep dive into the psychology behind the shape's enduring appeal." - Wired

"[The Book of Circles] explores information design in the form of circles - from 18th-century musical scores to photographs of Jupiter." - The Guardian

"Manuel Lima's The Book of Circles explores centuries of circular visual expression, from representations of infinity to maps of the stars." - Hyperallergic

"The human iris, a full Moon, volcanic calderas: natural circles have inspired culture for millennia. Information visualizer Manuel Lima gathered centuries' worth of circular charts, graphics and illustrations for this volume, organized in a 'taxonomy' spanning everything from spirals to pies. It's a ravishing tour, from the spangled glory of globular star cluster M13, imaged by the Hubble Space Telescope, to Martin Krzywinski's bold 2007 radial genomics diagram Human-Dog Homology. Puts circular thinking in a whole new light." - Nature Magazine

"Like its predecessor, this is a beautifully produced book with amazing illustrations. This book will be invaluable for those studying or interested in graphic design, information design, statistics, or data visualization. As Creativity magazine predicted in 2009, Lima is quickly taking his place next to Edward Tufte-author of, among other titles, Envisioning Information and Beautiful Evidence (2006)-as a high priest of the diagram. Summing Up: Essential. All readers." - Choice magazine

"A richly illustrated compendium probes the colorful history of the circle. Lima's aim is not so much to tell this history as to show it. And, by all accounts, he succeeds.The Book of Circles is, above all, a wide-ranging exploration of an elemental shape in its guises as a form, symbol, motif, and more. The book joins Lima's previous work, The Book of Trees, as an important study of one of our most human of impulses: to give abstractions visible form. This ancient and universal impulse will no doubt continue in perpetuity. We can hope that so, too, will insightful efforts-like Lima's-to document and understand it." - Science Magazine

"If there is a universal building, block it's probably round. In The Book of Circles, data visualization designer Manuel Lima shows how the circle has shaped human cognition." - Surface Magazine

"The humble circle gets its due in this visual study by designer Manuel Lima (The Book of Trees: Visualizing Branches of Knowledge), who specializes in the visualization of data." - Publisher's Weekly