The Cure FAQ: All That's Left to Know about the Most Heartbreakingly Excellent Rock Band the World Has Ever Known (Paperback) 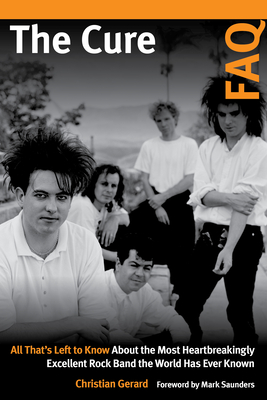 The Cure FAQ: All That's Left to Know about the Most Heartbreakingly Excellent Rock Band the World Has Ever Known (Paperback)


Not On Our Shelves—Ships in 1-5 Days
Led by the iconic frontman Robert Smith, the Cure remain one of the most beloved and influential bands in the history of alternative rock. Thanks in part to classic singles like "Just Like Heaven," "Boys Don't Cry," "Lovesong," "In Between Days," and many others, the Cure have sold millions of records worldwide and have performed in front of countless fans in every corner of the globe. Albums like Disintegration, Kiss Me, Kiss Me, Kiss Me, and The Head on the Door are universally hailed as landmarks of the genre. For the first time, The Cure FAQ covers the band's forty-plus year career while offering fresh insight into each song in the Cure's vast canon. Each album is dissected and reviewed with candid commentary and extensive research. With their March 2019 entry into the Rock and Roll Hall of Fame firmly establishing the Cure's place in the musical stratosphere, the timing for a career overview is perfect and The Cure FAQ delivers.
Music writer Christian Gerard has been listening to the Cure for over thirty years. Originally from Morgantown, West Virginia, Gerard spent many years in the Washington, DC, area before moving to Minneapolis in 2018. A diehard music geek, he has written for publications and sites like NBC Washington, The Washington Blade, Metro Weekly, and PopMatters, among others.