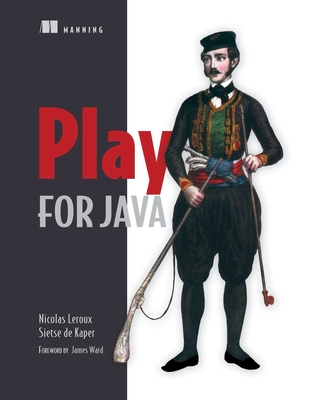 Play for Java shows you how to build Java-based web applications using the Play 2 framework. The book starts by introducing Play through a comprehensive overview example. Then, you'll look at each facet of a typical Play application, both by exploring simple code snippets and by adding to a larger running example. Along the way, you'll contrast Play and JEE patterns and learn how a stateless web application can fit seamlessly in an enterprise environment.

For a Java developer, the Play web application framework is a breath of fresh air. With Play you get the power of Scala's strong type system and functional programming model, and a rock-solid Java API that makes it a snap to create stateless, event-driven, browser-based applications ready to deploy against your existing infrastructure.

Play for Java teaches you to build Java-based web applications using Play 2. This book starts with an overview example and then explores each facet of a typical application by discussing simple snippets as they are added to a larger example. Along the way, you'll contrast Play and JEE patterns and learn how a stateless web application can fit seamlessly in an enterprise Java environment. You'll also learn how to develop asynchronous and reactive web applications.

The book requires a background in Java. No knowledge of Play or of Scala is assumed.

Purchase of the print book includes a free eBook in PDF, Kindle, and ePub formats from Manning Publications.

Nicolas Leroux is Technical Director at Lunatech Research in The Netherlands and is a core developer of the Play framework. Nicolas is also a frequent speaker at conferences where he introduces Play to the audience.

Sietse de Kaper, a software developer at Lunatech, has been developing and deploying Java-based Play applications since version 1.0. Having had the opportunity to use Play for several projects, he considers it the most effective framework in the Java ecosystem.