The Immortal Mind: Science and the Continuity of Consciousness beyond the Brain (Paperback) 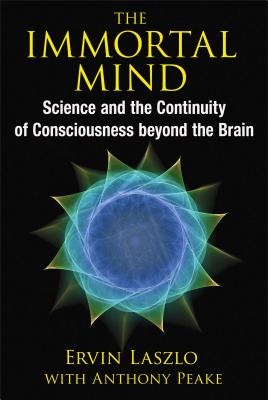 The Immortal Mind: Science and the Continuity of Consciousness beyond the Brain (Paperback)

By Ervin Laszlo, Anthony Peake (With)

• Examines findings on the survival of consciousness beyond life, including near-death experiences, after-death communication, and reincarnation

• Explains how this correlates precisely with cutting-edge physics theories on superstrings, information fields, and energy matrices

• Reveals how consciousness manifests in living beings to continue its evolution

Evidence now points to consciousness existing beyond the brain, such as when the brain is temporarily incapacitated, as well as to the survival of consciousness after death. Conventional science prefers to dismiss these findings because they cannot be accommodated by a materialist view of reality. Spirituality and religion embrace the continuity of consciousness and ascribe it to a nonmaterial spirit or soul that is immortal. As such, spirituality/religion and science continually find conflict in their views. But what if there truly is no conflict?

Based on a new scientific paradigm in sync with experience-based spirituality, Ervin Laszlo and Anthony Peake explore how consciousness is continually present in the cosmos and can exist without connection to a living organism. They examine the rapidly growing body of scientific evidence supporting the continuity of consciousness, including near-death experiences, after-death communication, reincarnation, and neurosensory information received in altered states. They explain how the persistence of consciousness beyond the demise of the body means that, in essence, we are not mortal--we continue to exist even when our physical existence has come to an end. This correlates precisely with cutting-edge physics, which posits that things in our plane of time and space are not intrinsically real but are manifestations of a hidden dimension where they exist in the form of superstrings, information fields, and energy matrices.

With proof that consciousness is basic to the cosmos and immortal in its deeper, nonmanifest realm, Laszlo and Peake reveal the purpose of consciousness is to manifest in living beings in order to continuously evolve.
Ervin Laszlo is a philosopher and systems scientist. Twice nominated for the Nobel Peace Prize, he has published more than 75 books and over 400 articles and research papers. The subject of the one-hour PBS special Life of a Modern-Day Genius, Laszlo is the founder and president of the international think tank the Club of Budapest and of the prestigious Laszlo Institute of New Paradigm Research. The winner of the 2017 Luxembourg Peace Prize, he lives in Tuscany. In 2019, Ervin Laszlo was cited as one of the "100 Most Spiritually Influential Living People in the World" according to Watkins Mind Body Spirit magazine.

Anthony Peake is a writer, researcher, and author of 7 books, including Making Sense of Near-Death Experiences, which received a “highly commended” award from the British Medical Association. He lives in Crawley, West Sussex, U.K.
“In this important and well-written book overwhelming evidence is provided for the continuity of consciousness after physical death. After reading this wonderful book it seems obvious that we are and always will be instantaneously interconnected with each other, because our eternal consciousness will never end; it is beyond time and space. We are then forced to reconsider the never proven hypothesis that the brain produces mind. Highly recommended.”
— Pim van Lommel, M.D., cardiologist and author of Consciousness Beyond Life

“Hands down, this is the best collection of evidence from near-death experiences, apparitions, after-death and medium-transmitted communication, past-life recollections, and reincarnation ever put together. Laszlo and Peake skillfully weave all of this into the deeper dimensions of consciousness and creation, what many call the Akasha, to establish the immortality of the soul and the purposefulness of the human experience. Real, irrefutable evidence.”
— P. M. H. Atwater, L.H.D., author of The Big Book of Near-Death Experiences

“Finally, leading scientific theory meets highly suggestive research for the continuity of consciousness after physical death. As a result, The Immortal Mind routs the dead-end dogma of scientific materialism like no other book you’ll read.”
— James O’Dea, former president of the Institute of Noetic Sciences (IONS)

“Combined with a discussion of quantum physics, Laszlo and Peake present a convincing case for nonlocal consciousness. A most enthralling read that highlights we are undergoing a very exciting paradigm shift.”
— Penny Sartori, Ph.D., RGN, author of The Wisdom of Near-Death Experiences

“We are entering in to a new paradigm of understanding consciousness and its relationship with the brain and beyond. In The Immortal Mind, Laszlo and Peake provide a concise and lucid overview of the data for consciousness beyond the brain. Exploring a revolutionary new mechanism of consciousness-brain interactions using the principles of modern science such as quantum physics and string theory, this book is a welcome addition to the current paradigm shift of consciousness and a great asset for any student of the subject.”
— Manjir Samanta-Laughton, M.D., author of Punk Science and The Genius Groove

"Ervin Laszlo with Anthony Peak take serious steps toward answering this grand question: does a part of our consciousness carry on after death and, if so, what evidence is there to support this contention? If taken seriously, the proof uncovered by the authors will hopefully shake a few foundations and lead us onto the correct path once and for all so that, as individuals, we might have some insight into what happens once the final curtain on this life comes down."
— New Dawn, Bruce Stringer, October 2015