The Branch Will Not Break - Empty-Grave Extended Edition (Paperback) 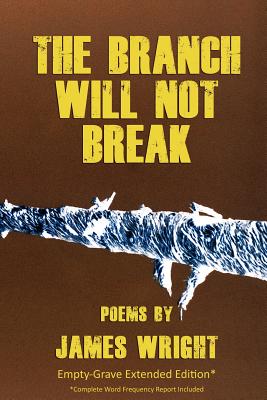 The Branch Will Not Break - Empty-Grave Extended Edition (Paperback)

By James Wright, A. Nicolai (Editor)


Not On Our Shelves—Ships in 1-5 Days
(This book cannot be returned.)
Pulitzer Prize-winning poet James Wright shines in the Empty-Grave Extended Edition of THE BRANCH WILL NOT BREAK. This beautifully bound 6" by 9" trade paperback also contains a complete word-frequency report for readers that wish to delve further into interpretation. The publisher has done everything possible to ensure the main body of text in this book matches its original 1963 release; this includes page size, vertical and horizontal alignment of each individual poem and its separate stanzas, verses that span multiple pages, and non-traditional use of white space. In these forty-three poems the wordsmith weaves together visions of nature and the decay of American life in true form. Readers can further dig their teeth into interpretation and theme via the comprehensive Word Frequency Report available only in this Empty-Grave release. Complete list of poems: As I Step Over a Puddle at the End of Winter, I Think of an Ancient Chinese Governor Goodbye to the Poetry of Calcium In Fear of Harvests Three Stanzas From Goethe Autumn Begins in Martins Ferry, Ohio Lying in a Hammock at William Duffy's Farm in Pine Island, Minnesota The Jewel In the Face of Hatred Fear Is What Quickens Me A Message Hidden in an Empty Wine Bottle That I Threw into a Cully of Maple Trees One Night at an Indecent Hour Stages on a Journey Westward How My Fever Left Miners In Ohio Two Poems About President Harding Eisenhower's Visit to Franco, 1959 In Memory of a Spanish Poet The Undermining of the Defense Economy Twilights Two Hangovers Depressed by a Book of Bad Poetry, I Walk Toward an Unused Pasture and Invite the Insects to Join Me Two Horses Playing in the Orchard By a Lake in Minnesota Beginning From a Bus Window in Central Ohio, Just Before a Thunder Shower March Trying to Pray Two Spring Charms Spring Images Arriving in the Country Again In the Cold House Snowstorm in the Midwest Having Lost My Sons, I Confront the Wreckage of the Moon: Christmas, 1960 American Wedding A Prayer to Escape From the Market Place Rain Today I Was Happy, So I Made this Poem Mary Bly To the Evening Star: Central Minnesota I Was Afraid of Dying A Blessing Milkweed A Dream of Burial.