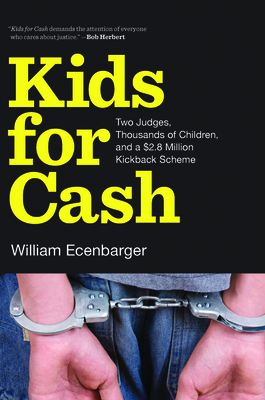 From the Pulitzer Prize-winning Philadelphia Inquirer reporter William Ecenbarger comes the expos of a shocking scandal that ruined thousands of young lives. As the Boston Globe wrote, "the story is incredible: thousands of children wrongfully sentenced to juvenile detention centers, many without legal representation and after cursory hearings, by two rogue judges in northern Pennsylvania who received millions of dollars in bribes from the private institutions' owners." The story has all the elements of a true-crime legal thriller--mafia connections, colorful characters, corruption--and was made into a documentary of the same title released in theaters in 2014. But the survivors of the harrowing ordeal have finally gotten some justice: in August 2022, it was ordered that the disgraced judges must pay hundreds of millions of dollars in compensatory and punitive damages to the victims.

When it was first released, Kids for Cash brought the story to national attention, where it has stayed ever since. As the Philadelphia Inquirer pointed out, this is the "worst stain on Pennsylvania, a state with more than its share of stains. . . . Ecenbarger offers a detail-packed, sickening account of the scandal and its impact. Anyone caring about courts, justice, or children should read it."

William Ecenbarger was part of a "Philadelphia Inquirer" reporting team that was awarded a Pulitzer Prize for their coverage of the Three Mile Island nuclear accident. Once an international correspondent for "Reader's Digest," he has been published in the "Washington Post," the "Los Angeles Times," "Smithsonian Magazine," "Esquire," "Audubon," and other leading newspapers and magazines. He is also the author of "Walkin' the Line," a travel-history narrative about the Mason-Dixon Line. He lives with his wife, a travel photographer, in Hershey, Pennsylvania.